I took this week off work so I could get in lots of training before I taper for the Ironman. Yesterday was a rest day (great way to start a vacation) so Cheri and I went to the Brewers game.

Today, I decided to buy some new running shoes. I was hoping mine would make it through the Ironman, but I could tell by my aching knees Sunday night that it's time to retire my shoes. I went to Berkely Running Company because I've never been there and I saw on their website they carry Adidas.

I went there hoping to come home with Adidas Boston Classics. I wanted something a little lighter than the Supernova Cushions I've been running in, and I thought those might be the ones. They didn't have them so I tried some other shoes they suggested and I came home with Saucony Progrid Guides. They're about the same weight as my Supernovas, but they don't feel as bulky since they have a thinner sole. They're super comfy and I think they're going to work out better than my other shoes since the toebox feels a little bigger in these and my Adidas have been rubbing my toes and giving me blisters on long runs.

I had some elastic laces I never used so I put those in my Sauconys this afternoon. This way I can just slip them on and off. No more pesky laces to tie. But mainly I switched laces because I'm tired of long shoe laces flapping around and hitting my legs on long runs. It drives me crazy. Mine are rigged up kind of like this, except I just ran the laces through the shoes eyelets like normal laces. I didn't see the need for those goofy plastic eyelets they give you with the laces. 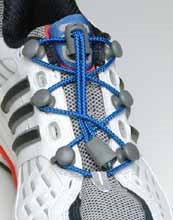 Today is an easy day since I'm still recovering from the weekend. I'll go for an easy ride, run and swim.

Wednesday is a tough day. In the morning I'm going to do a long brick. I'm planning a 50-60 mile ride (above IM intensity) followed by a 10-12 mile run. I think doing a long run after a fairly long ride will help me test my nutrition plan some more. Later in the day I'll get in some swimming.

Thursday is another easy day. Swimming and an easy ride.

Friday is my big day. It's the real test of stamina and nutrition. I have a 56 mile loop I do that includes about 40 miles on the IM course... 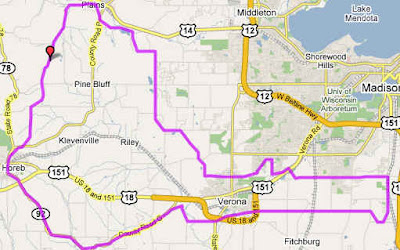 My plan is to do 2 loops (112 miles) followed by a one hour run. I'm going to follow the same nutrition plan from Saturday and I'm going to drink a lot of water again. I have my water stops planned out - gas station on PB/Whalen, Mt. Horeb gas station, house on the top of the hill on Timber Lane that leaves their hose out for cyclists and my apartment. I can also stop at Fireman's Park and get water from the vending machine and I can stop at Uphill Grind - a bike/coffee shop that will mix gatorade for you in your bike bottle...pretty cool. No excuses for being dehydrated.

I've been trying to do my long rides above Ironman intensity, but not this one. According to the book on powermeters I use, I should be able to average from 187-214 watts for an Ironman race. I know 214 is way too high for me so I need to shoot for the lower end of that scale. I was thinking I might be able to shoot for 195-205, but I think that may be a little high as well. 195 might be okay, but I think 205 will take too much out of me and make for a tough run.

So my goal for Friday is to average between 190-195. Going above 200 would definitely make that range feel easier for race day, but I want to know how I feel after a long ride in that power range. If I feel good, then that will be my goal for race day. If not, then I'll lower it a bit. If it feels really easy (what are the odds on that) I'll probably leave it alone instead of raising it. I'd rather finish the Ironman feeling like I could've biked harder than risk having a crappy run by riding too hard.

A one hour run after a ride that long will give me a really good idea if I'm on track with my nutrition and if I'm pushing too hard on the bike. I'm feeling pretty confident in my nutrition after Saturday, and now that I finally took Mark's advice and started using what they supply on the course I won't have to carry so much with me (meaning, I won't have to race with that stupid bento box). Right now for raceday I'm just planning on carrying a bottle of Perpeteum (on my bike frame so I don't lose it) and a few caffeinated gels taped to my top tube. I'll start out with a bottle of Gatorade Endurance and water in my rear bottle cages and ditch those and keep grabbing water, Gatorade and gels from the aid stations. That's the plan, Stan.

Saturday is a fairly easy day again....long swim and I might go for an easy ride. We'll see.

Then it's taper time.


I've really enjoyed training for the Ironman, but I'm getting ready for it to be over. I want to ride on the weekends without worrying about powerzones and nutrition plans. I want to go for lunch rides with the guys from work and not worry if attacking a few hills is going to ruin my key workouts.
Posted by Mike at 2:54 PM

Try to get those new shoes broke in some before IM. I am sure you will.
Once again the weather is supposed to be perfect for training this weekend.
Sounds like you have a good plan. I think if the IM was tomorrow, you'd be ready

and diligence and academia architects artists and designers to come together And uncountable machines [url=http://www.ddtshanghaiescort.com]escort shanghai[/url] utilized in industrial oeuvre