They're not the healthiest treats, but after a long, brutal workout I want one of three things: a Snickers Marathon bar, an M&M Candy Freeze from Frostee Freeze or a donie with chocolate frosting and sprinkles.

Since Frostee Freeze is in Janesville and I was in Madison today, that wasn't an option. Marathon bars are great, but I eat a lot of them so they're not much of a treat sometimes. So that left a donie, which I had been thinking about for the last 2 hours of my workout.

I went to Pick N Save to pick up a bag of ice for my ice bath and a donie. Pick N Save never fails to disappoint me. It's usually at the cash register, but today it was at the bakery. Nothing. So I picked up some ice thinking I had a Marathon bar at home....nope. So I had V8 V-Fusion and an Odwalla bar....healthy crap.

Anyway, this was my big workout today. About 112 miles on the IM course followed by a one hour run. My goal for the bike was to average between 190-195 watts. I was hoping that would be 19+ mph, but I was more concerned about watts than speed. My goal for the run was to go harder than IM pace...if possible. I figured I would shoot for an average pace of 8:4x. If I could pull that off after a long ride, I would be very happy with my workout.

When going over my bike yesterday to make sure it was good to go, I noticed that I did brake hard enough to ruin my tires the other day. My tires skidded enough to wear through the rubber and expose the white fibers that hold the tire together, but not enough to pop the tube...whew. I have a new set of tires I'm saving for IM, and I didn't want to put those on yet so I dug through the closet to see what I could find. Luckily, I had saved a set of Michelin Pro Race 2s that I was going to use on the trainer until Dennis decided he wasn't going to put enough miles on the trainer over the winter to justify the trainer tire he bought. So I bought it off him and saved the Michelins. They're worn, but I think they can get me through the next few weeks. I'll have to thank Dennis for buying that trainer tire.

Here's the nutrition plan for the day...

About 300 calories per hour, plenty of sodium and lots of water.

I also bought a saltstick, which you can put in the end of your aerobars and it holds 3 salt tabs. All you do is turn the knob and out pops a salt tab. Pretty schnazzy.

There's not a whole lot to say about the ride. It went well, and I figured out how my bottles are dropping (I didn't drop any, but it was close...I caught them a few times as they were falling out). It turns out they're dropping out the bottom of my bottle cage instead of the top like I thought. I'm going to tape a little extension on the bottom of my cages so I don't lose bottles (carbon bottle cages and I'm going to tape a piece of plastic to them...it's not right).

My average watts were a little lower than I wanted, but that's mainly from stopping at stop signs, lights and gas stations for water. I was close to my goal, so it's good enough...


I quickly put on my running shoes, grabbed my gels and water and was out the door. (note to self: no propel on the run...it doesn't mix with flavored gels very well). I ran in my new Sauconys Tuesday and got some pain in my right knee so I was little nervous about this run. I wasn't sure if it was the shoes or the 20 miler last Sunday. Luckily, it must have been the long run because the shoes felt great today. Very comfy and more room in the toes than my other shoes - no blisters.

I usually get over the heavy leg feeling within a mile or two and settle into a good rhythm. Today it took about 4 miles, a lot longer than I expected but that's good to know so I don't get worried when I'm still feeling sluggish at the 3 mile mark raceday.

The run went surprisingly well. I expected to bonk or fade or throw up or (you name it). But instead I felt decent and eventually found a good rhythm. The good thing about doing really long runs is that 7 miles doesn't feel that long any more. 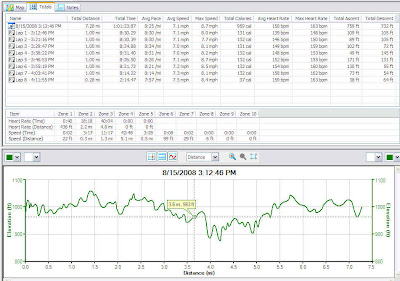 The run felt good, but there's no way I could hold that pace for 26.2 miles.

After my long workouts, I immediately drink some Endurox then I go get a bag of ice for an ice bath. I like vanilla, so I switched to vanilla Endurox from the fruit punch....bad decision. It smells like spoiled milk...the last thing you need to smell after 7 hours in the sun.

Speaking of that, the weather was phenomenal today...upper 70s with white puffy clouds and 5-10 mph winds. I hope we have conditions like this raceday, except I'm really hoping for low 70s (or even better - upper 60s).

I still have some long workouts coming up, but this my biggest one and it went really, really well. I feel ready for the race and confident that I'm going to have a good day. Anything can happen, but I feel like I've done everything I can do to make sure I'm prepared.

Sometime this weekend, I'm going to get the donie.
Posted by Mike at 5:39 PM

After that you need 2 donies. I'm not much of a donut guy. And I hate the vanilla endurox for exactly the reason you stated. It's kind of wierd and nasty. I like the fruit punch a lot more.

You are ready to have a great race and I get to be there to watch. That's going to be sweet. What's even better for you is that you get to sleep in your own bed the night before.