The person on the back of that tandem has a disturbing dedication to aerodynamics.

I've been slacking lately on the blog. Nearly everyday I intend on getting caught up....and then it doesn't happen. Anyway, the other week ended up being a week of time trials. That wasn't really planned, but that's how it worked out. I knew I had the first of 3 indoor time trials at SBR Coaching on Saturday, but I wasn't expecting time trials at masters class on Wednesday. The coach sprung them on us so I wasn't really prepared, but it was nice to do some time trials to see where my swim fitness is so I have some benchmarks to gauge progress off.

Those aren't great times, but they're good for me so I'm happy with where I'm at right now. I think masters is helping my swimming so I think that I'll get faster as masters class continues.

Saturday was the first of the SBR time trials - a one hour TT. I rode the flat course....

Last year they only had one one-hour TT and my average power was 276. I was hoping to match that this time, although I wasn't sure I could do that yet. I managed 272 so I wasn't too far off. TT #2 is in Feb so I'm hoping to step it up a bit and match or beat my power from last year.
Posted by Mike at 6:41 AM No comments:

When it comes to training, I'm a geek. No doubt about it. I love crunching the numbers and, better yet, comparing them to previous numbers. So with a new year comes a new training season and a whole new set of numbers to compare to previous years. And with this year being all about going as fast as I possibly can at IMWI, comparisons are very helpful in determining if I'm making progress and on the right track.

So I started out by comparing some running numbers. First, overall volume.

That's a nice increase, and I'd like to keep that number growing this year. I don't have a specific number in mind, but I would like to break 1500 miles. That averages out to 125 miles per month, or about 29 miles per week. Mainly I'm just going to log a lot of miles and see where I end up. If I don't break 1500, no worries, but it would be nice.

As you can see, I consistently ran more miles per week in 2009. That came mainly from stepping up my running frequency to 5 times per week. Plus, I bumped up my short, easy runs from 3 miles to 5. You can also tell I like to take some time off to recover near the end of the year.

So my goal for 2010 is to build on that. I'm going to keep my frequency at 5, but I'll bump up my distance a bit and I might run twice a day one day per week during the spring and/or summer to help keep my volume high.

But, while it's nice to see numbers broken down like that, I already knew I ran more in 2009 so that wasn't really that helpful. So I wanted to get down to a more micro level and see if I could learn something from the numbers to determine if I'm on the right track, see if I'm improving. I feel like a better runner, but if you compare IM marathon times I was nearly an hour faster in 2008. The weather had a lot to do with that, but I have no proof that I would've run faster in cooler weather. Feeling like a better runner doesn't necessarily mean you are a better runner.

So I focused just on the month of January to see how this year compares to the previous two years: 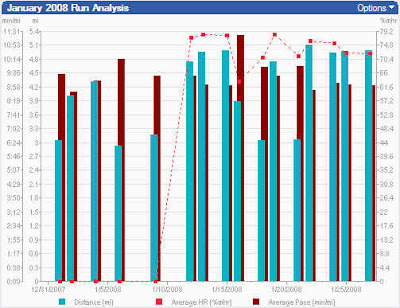 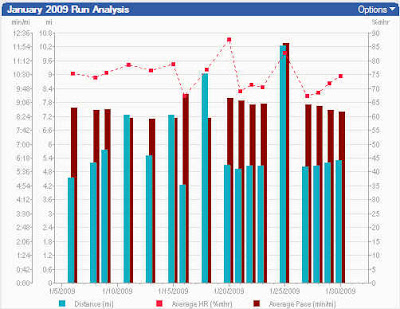 2009
Blue = Distance Maroon = Average Pace Red Line = Average Heart Rate
If you're curious about the run in the middle of the month with the high heart rate, that was a snowshoe run. 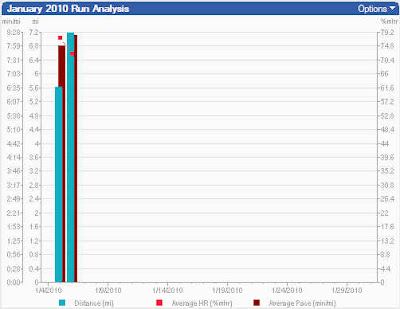 So, not only have I gradually increased the distance, but I'm running faster and my heart rate is lower. This tells me that I'm still gaining fitness. I'm building upon previous years and making progress. I feel that right now I'm on the right track and plan to continue using the running plan I was on last year. I made good progress and found some things that work.

If you're wondering what those are, here you go:

- Frequency. I ran 5 days per week. T-F and Sunday.
- Consistency. You can see by the weekly volume chart that I kept my weekly mileage fairly consistent all year. I had some easy weeks for recovery, but I never really let my volume drop off too much.
- More long runs. I ran 10 or more miles 34 times in 2009. I plan to increase that number this year.
- Heart rate. I tried to keep my HR on my base runs around 80% of max. If I found my HR starting to get too low, I'd pick up the pace.
- Negative-split HR tempo runs. There's a mouthful. I did quite a few of those, and I think they helped a lot. I ran out for about 32 minutes at 70-75% of max HR. Then I turned around and ran back (about 28 minutes) at around 90% of max HR. That's a really good workout.
- Hills. I ran Elver hill repeats a lot. This year I'll be doing a lot more hill work.

That's the bulk of it. This year I'm adding a short strengthening routine 3 times per week. I'm also adding yoga to help with injury prevention. And, I'm going to do more track workouts this year. I did a few in 2009, but not many. I love track work so I'm looking forward to getting out there and pounding out some laps.

One more thing about 2010....I plan to set a new weekly mileage personal best. So far the most miles I've run in a week is about 45. I hope to break 50 at least once this year.

I figure I'll need to run a 3:30 marathon or better at Ironman this year (that's an 8 minute pace) so I have my work cut out for me. 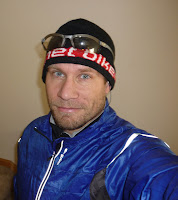 A new year has arrived, and I couldn't be happier. 2009 was rubbish. But 2010 is looking good, and I'm excited about getting back into training. I've been training, but not much. It's hard to get a lot of work in during the holidays. There are always tons of excuses and lots of tempting candy.

But now that the holidays are over, it's time to start focusing on the job at hand, and that's Ironman Wisconsin. I've been tweaking my annual training plan and planning my race schedule. Here's an overview of the new plan, which starts today. New year, new plan:

The plan starts with four weeks of base training, one week of build and then my first 'A' race of the season - the Rockman Half Ironman. You may be surprised I would chose that race as an A race, but the timing is perfect and it's close to home. The Door County Half Ironman is still on the schedule, but it's no longer an 'A' race. I'll race it tired and do the best I can.

After the Rockman, I do two 5 week build cycles and then taper for Ironman Wisconsin. I'll throw in some short races for fun throughout the year. Not sure what those will be yet, but I'm sure I'll work in a sprint tri or two, a few duathlons and some running races, maybe a half marathon.

So that's the plan in a nutshell. My first race of the year is a week from Saturday, the first of 3 one-hour TTs at SBR Coaching. I've done their indoor time trial series the past few years and this winter they're mixing things up a bit by going with three one-hour TTs rather than four 10K TTs. They'll be super tough, that's for sure, but I'm looking forward to them. An hour at threshold is brutal so they should be great workouts.

Those aren't exact, but pretty close. My goal this year is to beat those numbers, especially swimming. That was weak.

Bike: 464 miles - not quite so easy to beat since I did some outdoor riding in CO and this year will be all indoors unless our weather takes an unexpected turn.

Run: 108 miles - I'm already at 17 for the month so I think I can beat this number without too much trouble.
Posted by Mike at 5:57 PM No comments: