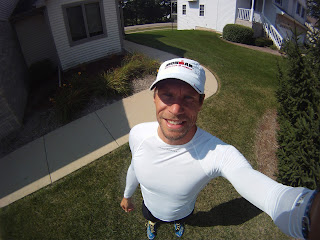 I’ve finished my last training block and am now tapering for Ironman Wisconsin which has given me a little time to reflect.  2013 through most of 2014 was my best block of training and racing.  I was handling the training really well and was setting PRs and felt like a really solid contender for a Kona slot at Ironman Chattanooga.  Then I injured my back and had to drop out.  It was during the worst of my injury when I registered for Ironman Wisconsin. It felt a little crazy at the time, but I was determined to prove this injury couldn’t slow me down.

I made some mistakes pushing too hard too soon trying to get back to where I was.  Going to Puerto Rico was fun, but doing that race was a mistake.  I wasn’t ready.  The same is true for Knoxville.  Muncie was an improvement, but still well behind last year.

It hasn’t been all bad though, just inconsistent.  I set a best 90 minute power earlier this year.  I had a good brick long run a couple of weeks ago and set a best 5 hour power last week on an indoor ride.  I’ve also had some really bad workouts and have missed some training due to setbacks. I’ve struggled with my swimming all season and can’t quite figure out what the problem is, if it’s related to my injury or not.  Cycling has been good, but running has been a big struggle this year.

Recently, I heard/read a couple of great quotes that really struck a chord with me….

“When I was at my best I was overcoming myself. When I ended up disappointed I was trying to overcome others, to win, to beat other people.”


And two good quotes from a Slowtwitch interview with Jordan Rapp....


Jordan:  "...I told him I wanted to talk about the idea of “resilience.” My friend Paulo Sousa introduced this idea to me about a year ago. Resilience is caring enough that you are willing to bounce back and try again if you fail. But you also need to not care so much that you get crushed by failure and by setbacks. It’s a tricky balance..."

ST: What was stopping you from your highest level of performance?

Jordan: I think it was an exclusive focus on objective goals - winning or hitting certain numbers in training. I stopped caring about having a good race or having fun... 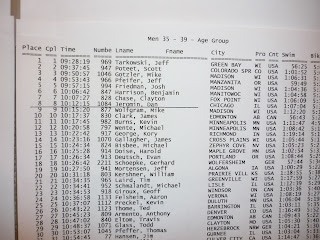 Back in 2010 my training went really well all season and I still needed a roll down to get a Kona slot.  I may have a bigger fitness base now, but looking back over the season and being brutally honest with myself, it doesn’t look like the work of a Kona qualifier.  It hit me in the middle of Devil’s Lake the other day struggling through yet another sloppy swim.  I’m just simply not where I want to be.  I’ve been fooling myself. I won’t lie, it’s a very disappointing realization, but then I thought about Jordan’s quote on resilience.

I initially said I wouldn’t race if I didn’t think I could qualify because it wasn’t worth it to go through all that and run the same time I’ve done several times already.  I want to reach the next level.  But I decided that after all this work, good or bad, I need to follow through and finish what I started.

Fortunately, it’s never too late to change your approach.  Ironman Wisconsin is just another day in the overall process of training and racing triathlon.  So my goal is to focus only on myself and take pride and find satisfaction in a well-executed race.  I know it’s a cliché, but I just want to have fun.  I want to cross the finish line knowing I did the best I could on that particular day.

After that, I’m taking a month off.  Mentally I want to continue training, but physically I need to recover from years of training and injuries.

Then I’m going to rebuild.