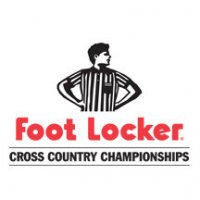 Saturday was the Midwest Footlocker Cross Country Regional Championships.  It's a high school race where the best runners in the midwest race for a shot to go to San Diego in two weeks for the national championships.  The competition is fierce because there are only 10 spots for boys and 10 for girls.  They also had an open class, which I ran and finished off my cross country "season."

The race was held on the UW-Parkside cross country course where I raced my first race.  It's a tough course, but it's also a great course so I was looking forward to running there again.  Mainly, I was looking for a PR.  April 12, 2008 I ran a 5K in Beloit and finally broke 20 minutes with a time of 19:23.  That has essentially been my 5K PR since then.  I've taken a couple of seconds off of it, but haven't come close to breaking 19 minutes.  That was my main goal: break 19 minutes.

The weather was decent for late November.  The high was in the low 30s, sunny and windy.  Courtney and I got there early enough to watch the championship races, where I froze my ass off.  I don't know if I didn't dress warm enough or if I'm just feeble and weak, but I was shivering the whole time while Courtney looked quite comfortable.  Pitiful.

Anyway, the racing was great.  These kids went all out and you could tell they were pushing themselves to their limits.  It was fun to watch. 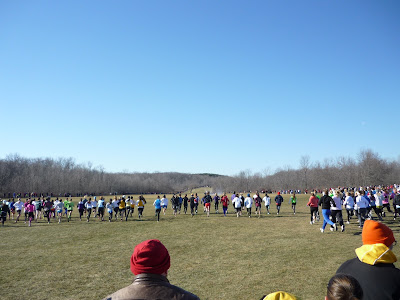 Start of the girls seeded race.
The girls race was first and it was a good, close race.  It wasn't until late in the race that Allison Woodward of Wisconsin pulled away for the win. 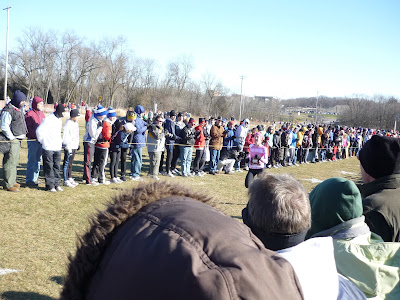 Girls winner.
The boys race wasn't as close, but it was still fun to watch.  Lukas Verbizcus, a high school triathlete in Illinois, won the national championship last year and was the favorite to win the regional.  He didn't disappoint.  He opened up a big lead by the halfway point and then cruised the last mile to win in 14:45 (that's a 4:45 pace). 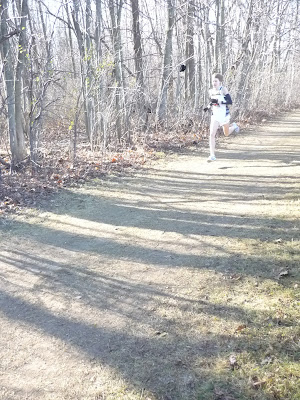 Lukas Verbizcus.
After watching the premier races, we headed indoors so I could warm up for my race.  There were two races before my race so I had about an hour and a half to prepare.  Luckily, they had the indoor track open so I was able to run some laps in there and get my body temp up.  After a good warm up, we headed back to the track for the open race. 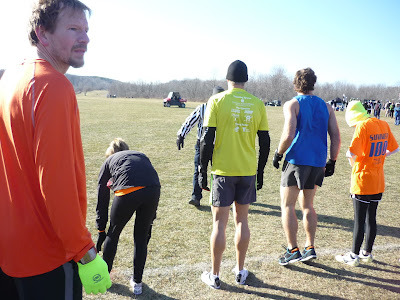 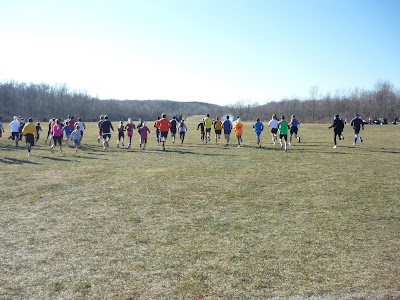 The start.
The race starts downhill and then there's a long, tough climb.  My goal was to go out hard, but not as hard as I did at the first race here.  I wanted to go out at a 6 minute pace and hold it as long as I could.  I went out harder than planned, but adjusted my pace pretty quickly.  The climb ends about the 1 mile mark and I was holding a 6:04 pace so I was more or less on target since I knew I could make up some time on the second mile since there's a long downhill section.

Elevation profile.
I hit the downhill hard but tried to stay controlled.  I was hoping I could bring my average pace down as well as my heart rate and recover a little before the final mile where there's more climbing.  A few of those hills are pretty steep and can zap the strength from your legs. 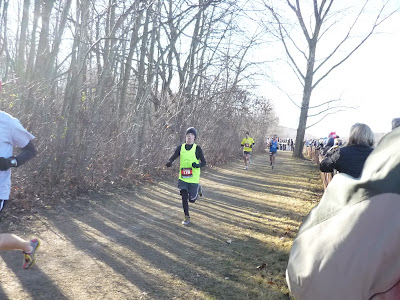 I'm in the yellow next the guy in blue.  This is about the 1.5 mile mark.
About 1.8 miles into the race you turn back into the woods and start a steep climb.  This takes you to the 2 mile mark where you have a short descent followed by another steep climb.  I was sitting right on a 6 minute pace as I started the climb.  By the 2 mile mark my average pace had dropped to 6:04.  I dug deep and tried to keep my pace up on the next climb but I could feel my legs getting tired.  The final mile doesn't have a lot of climbing, but it has more hills than the first two miles.  A lot of short, steep climbs that zapped the strength from my legs.  I knew a 6 minute pace wasn't going to happen so I just ran as hard as I could and didn't look at my watch anymore.  I did my best to recover on the downhills, but I was hurting.  My legs were weak and feeling a little wobbly and I was gasping for breath.  The last 3/4 of a mile took forever.  They had stars painted on the grass that started about 400 meters from the finish and I kept watching the ground looking for stars (this is one time in a race where seeing stars is a good thing). 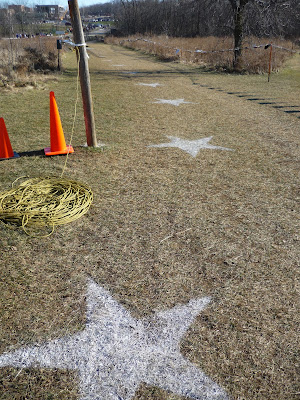 I hit the stars around the 18 minute mark and gave it everything I had.  I could see the finish....and I could see the clock ticking.  The finish line looked about a minute away.  I didn't come here for another 19:xx 5K.  I came to break 19.  My legs were weak and the finish is uphill.  Inside I was telling my legs to go, but they weren't responding.  I was sprinting although I know you couldn't tell. 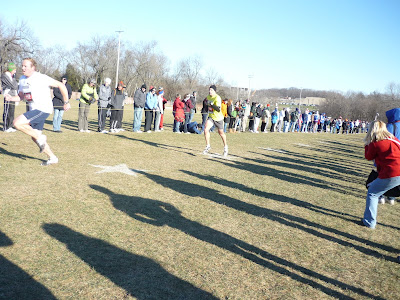 "Sprint" to the finish.
I could hear footsteps behind me and I tried to use that as motivation to run faster but my legs had nothing left.  As hard as I pushed I couldn't muster up anymore speed.  He sprinted past me just before the finish.... 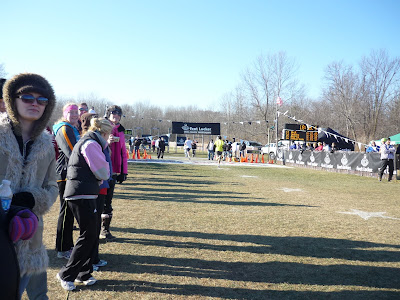 The finish.  18:55.5
I crossed the line in 18:55 and instantly had wobbly legs.  It was a typically cross country race as the officials yelled at us to keep moving and clear the finish area.  I could hardly stand.  They had a corral lined with ropes so I grabbed those for balance just as the guy who sprinted past me vomited.  I have seen more vomit hanging out at cross country races the past month than I have in my entire life.  Cross country is hardcore.
It was a really tough race and my legs were almost instantly sore, but it was well worth the pain.  I finally broke through the 19 minute mark.  I finally have a 5K PR, and it was on a challenging course so it's legit.  I earned that 18:55.5.
This was an event that drew a lot of real runners so my overall place wasn't great.  I finished 46th out of 176 and got dropped by a little girl with a half mile to go.  I've run races with kids before and they always go out too hard and fade.  I kept expecting her to drop off.  Instead, she dropped the hammer and pulled an 8 second gap on me in a half a mile and finished in 18:47.  She was 14.  To put that into perspective, the winner of the girls seeded race was a senior in high school and ran a 17:18.
It was  fun day, and I'm looking forward to returning next year to see if I can run a little faster and not get dropped by a little girl.
Posted by Mike at 6:00 AM 1 comment:

As you know, I've been pretty lazy lately when it comes to blogging.  So I thought I'd write a quick post to catch up and try to get back into the habit of blogging regularily.

Since my first cross country race a little over a month ago, I've been working on my running.  I've put in a lot of miles and done several races including a couple of cross country Turkey Trots which were really fun.

The first Turkey Trot was in Madison at the beginning of November and there were two races to choose from: a 5K and a 5 mile.  The 5K ran at 10 and the 5 mile at 11.  I signed up for both.  Not a good idea. 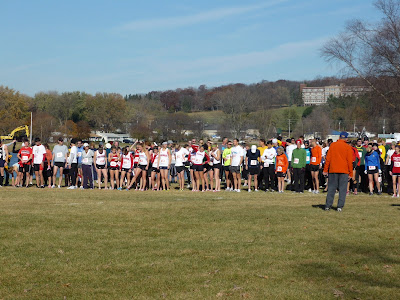 The start of the 5K. 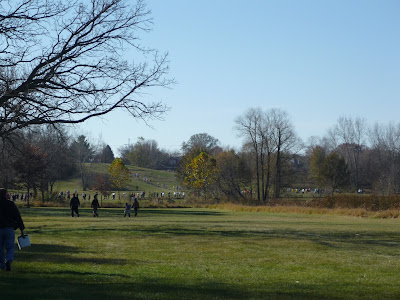 It's kind of hard to see, but that hill was really steep and I had to run it twice....in each race.  Ouch. 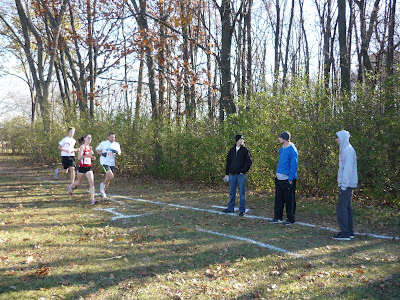 The end of lap one in the 5K.  What you don't see is the Badgers CC team doing a tempo run in front of me (they had the Big 10 Champs the next weekend so they weren't going all out, yet I couldn't catch them). 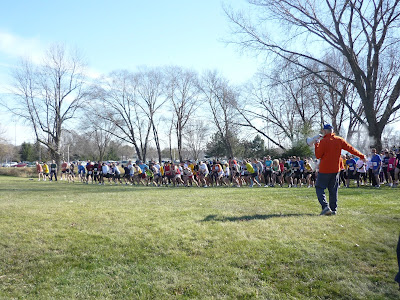 The start of the 5 mile race.
The next race was a 5K Turkey Trot in Lake Geneva and that was race was awesome.  I loved the course.  It was pretty hilly, but not so hilly it wasn't fun.  There was also a lot of variety in the terrain from grass to dirt to wood bridges to gravel to sand.  Post race was almost as much fun as the race.  They had the typical food and coffee inside a heated tent with live music.  Then they had a raffle and the prizes were great.  They gave away Montrail trail running shoes, jackets, Smartwool socks, Patagonia backpacks, gift cards to restaurants, etc.  I won my age group, and my prize was a beer, a pint glass and a tree.  Yep, a tree.  I won a blue spruce seedling that I need to plant.  For anyone in the area looking for a November Turkey Trot, I highly recommend this race.
This weekend is the Footlocker Midwest Regional Cross Country Championships.  It's a high school race, but they have an open class so I'm racing that hoping to set a new 5K PR.  It's on the same course as the 8K I ran in October.  So far the weather looks great for a late November race in Wisconsin: sunny with a high of 36.
Posted by Mike at 6:40 PM 2 comments: