Naked Old Men At The YMCA

There's something about old men, nudity and locker rooms.  I don't know what it is.  It cannot be explained.

I was at the Y the other day getting ready to go swimming when I accidentally noticed a naked old man. This is nothing new...naked, I mean...or old.  But this time it was too much.  Way too much.


He had his back to the locker room, foot on a chair and was bent over clipping his toenails.  My eyes!  My eyes!

Are they completely oblivious to the rest of the world?  Do they really no longer care?  Is that even possible?  It's a very difficult concept for me to grasp. How can a person possibly get to a point in their life where they either don't notice or don't care that everyone in the locker room just got a glimpse of their tailpipe? 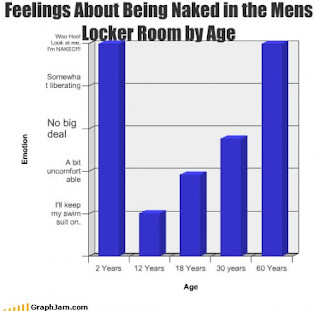 This had me thinking: maybe they truly do not realize what they're doing, so I came up with a good rule of thumb.  If you're in a locker room - or let's say, public - and you're in a position where someone else can see the back of your boys, you're doing something that requires underwear.  It's that simple.  Put your underwear on, THEN clip your toenails.
Or better yet, put your underwear on and clip your toenails at home. 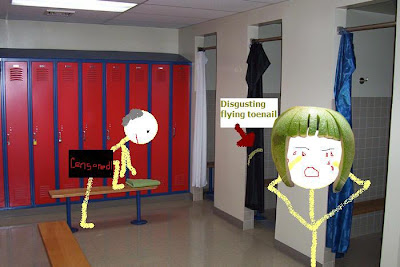 More artwork by Courtney.  She had a hard time drawing hair on my head
so I put my watermelon helmet on. I'm not crying, my eyes are bleeding....
and the actual toenail may have been green like the one in the picture.
A few months ago I was in the locker room changing into my swimsuit.  There was a naked, old man sitting on a towel on the bench clipping his toenails.  Little white elephant tusks flinging around the locker room...disgusting.  Then he slipped on his underwear and stood up to pull them up and the towel he was sitting on was stuck between his cheeks.  He was attempting to grab the towel to free it from his butt, but he couldn't reach and with his underwear around his knees I was afraid he may fall.  What I saw was a man in need and a situation I wanted no part of.  I've never changed and exited a locker room so quickly.
When I swam at the high school, there was a chubby, little kid that used to eat pretzels in the shower (I know that sounds ridiculous, but it's true).  Have you ever seen a bloated, water-soaked pretzel sitting on the shower floor?  It's pretty disgusting, but not as bad as a bent-over naked old man.  I'm pretty sure switching to the Y was a step in the wrong direction.  If only the hours at the high school were as good as the Y.  If only....
Posted by Mike at 8:00 AM

Wait until you sit down-wind of the old guy blow drying his under carriage.

Haha...I forgot about that guy.

After working at an athletic club for 8 years I have seen my share of old man nudity. 60+ seems to be about the right age where you just stop caring. Clipping nails, blow drying, shaving, long conversations, it just doesnt seem to matter anymore. Fortunately with some good drugs I may be able to erase my memory of the horrors I have seen.

I have the same problem at our Y, but not at the other gym (skews younger) I go to.

The old guys seem to need to sit on the bench, bare butt, and read the paper. While seeing the boys from behind while toe-nail clipping is bad, it's worse to see some old guy's shriveled junk mushed up between this thighs.

Hmm it looks like your site ate my first comment (it was extremely long) so I guess I'll just sum it up what I had written and say, I'm thoroughly enjoying
your blog. I as well am an aspiring blog writer but I'm still new to everything. Do you have any recommendations for rookie blog writers? I'd really appreciate it.
Feel free to visit my webpage : Trick Photography

nothing to do with age the ymca's in particular seems to be rife with gay men both young and old who troll their establishments being nude in a locker room for more than a minute is abnormal , the y has furnished areas were locker room nudity is no longer needed . These same men stare at other men as they undress or work out at the ymca or trying to close or have a conversation gay !

Wow. You guys need to spend some time in the military to get over your nude body phobia. It's only the young generation in America that has this. You would be laughed at in Europe. Locker room nudity is normal.
All men have the same equipment. Snowflakes.