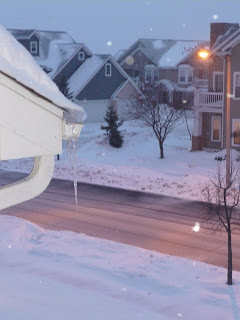 I haven’t been a very good blogger lately.  In fact, I’ve been a bad blogger, a lazy blogger.  To be honest with you, I’ve gotten a little bored with the blog lately.  I started it as a way to chronicle my journey to my first Ironman.  I thought it would serve as a way to journal my thoughts and training and add content that I didn’t include in my training log.  After my first Ironman, I wasn’t quite sure what to do with my blog, so for the past year or so I’ve been updating it but I haven’t put a lot of effort into it.  But I decided if I’m going to continue with the blog, which I am, I should put a little more effort into it and try to spice things up a bit.  Make it more interesting, add content, share more training and maybe add more personal aspects of my life so this isn’t just another boring training (b)log.
As with the boredom I’ve experienced with my blog, I experienced the same feelings with the dreaded trainer.  I’ve been struggling to put in big hours riding indoors this year, and Saturday was my breaking point.  I cracked.  I couldn’t take it anymore.  I was doing my best to stay motivated and block out the fact that I still had a few hours to go when I looked out the window and saw…..the sun?
The hell with it.  I’m riding outdoors.  My cross bike was at work, and in pieces.  And I had an afternoon yoga class.  But….maybe….just maybe I had time to ride.
In my inbox was an e-mail from Dennis asking what time we were riding.  He’s been riding outdoors lately, and invites me knowing I' won’t actually take him up on the offer.  This time I did.  I replied: 3:30 at PC.  Paoli loop.
I hustled over to the office, put my bike together, grabbed some lunch (I have a serious Gino’s addiction) and then it was off to yoga (more on yoga later).  After yoga, I hurried to the office where Dennis was waiting and we hammered out our first Paoli loop of 2010 in blustery conditions.  It was 25 degrees and windy.  But the roads were clear and the ride was great.  It felt so good to be on the open roads, to actually move when pedaling. 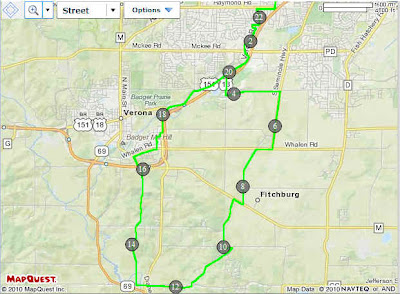 Backwards Gun Show loop.
We weren’t fast on our cross bikes, and to say we attacked the hills would be pretty generous.  We survived them, however, which was good enough for early February.
Sunday
Sunday I rode again, alone this time.  I ran early, from about quarter after 10 until 11:45.  Then I ate some lunch (not Gino’s – worth noting) and went to PC to get on my cross bike and get in some more outdoor miles.  My legs were tired from the run, but I figured I’d find a way to get through the ride. 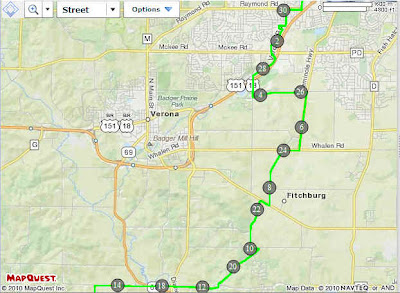 I mixed it up a bit and did an out and back.  I rode out to Paoli and past and climbed Observatory Hill.  Then back.   It was a good ride, nothing special. 30 miles which gives me a total of 53 outdoor miles for 2010.  Not too shabby for the middle of February.
I finished the ride at 2:45 and then ate some more, showered and went to a yoga class that started at 4.  And it destroyed me.  More on yoga in a future post.  I’m loving it, but I’ve also learned to respect it.  Don’t show up with seriously tired legs and expect to be okay.  Yoga’s hard.
But now I feel better, less lazy.  I made a few changes to my blog template and have a few ideas to improve my blog.  I got in some good training hours last week (15) and even got outdoors.  I ran and swam more miles in January than I did last January.  I’m ahead of last year, which is progress and that’s all you can do: keep making progress and hope you get where you want to go when you need to be there.
Posted by Mike at 7:46 PM

do you use heated gloves / innersoles when you go out in below freezing temps?

I want a cross bike.

Wow, I am beating the mighty Wolf in one training stat, outdoor miles, I've got 120 or so (although your one Observatory hill probably has more vertical than my season.) Like the new format and looking forward to hearing of your wacky training capers.

I use lobster gloves which do a good job keeping my hands warm. I just bought some heated insoles I'm going to try because I'm having a hard time keeping my feet warm. I just use shoe covers right now.

Mark - I'm not surprised you're ahead of me in outdoor miles. I've heard you guys have been out in some pretty crappy weather. That's a little too hardcore for me. I'm glad you like the new format. I'm having problems getting the links to work, but hopefully I'll figure it out. My blog was getting stale so I needed to mix it up a bit.