Swimming With A Parachute.

One of the toughest aspects of swimming, biking and running, I think, is the concept of efficiency.  As a concept, it's easy enough to understand.  Basically, go as fast as you can with as little energy as possible (i.e. swim, bike, run with good form).  Going from understanding the concept to actually achieving efficiency is the true challenge.  It requires patience, practice and focus, all of which become increasingly difficult as fatigue sets in.

It's easy to go out there and hammer out the miles as hard and sloppy as you can, and you'll go fast....for a little while.  But without being efficient, you'll waste energy and eventually get tired and slow waaaaay down.  Efficiency is why the elites make this look so easy.  It's not that they're not working hard.  It's that they've learned to use their energy efficiently.

Swimming is the sport where efficiency comes into play the most.  Water creates a lot of drag, and if you're not an efficient swimming you're going to waste a lot of energy and you're not going to go as fast as others using the same energy and producing the same amount of power.

The power needed to push an object through a fluid changes according to resistance (drag).  And the drag increases with the square of the speed.  For example, to go twice as fast you need to exert four times the amount of power.  To go three times as fast, you need nine times the power.

When you think about it like that, you can see why spending some time becoming efficient is really important.  You can only generate so much power, so if you can figure out a way to go faster on the same amount of power you’re definitely headed in the right direction.
My masters coach, however, opted for the opposite approach last week.  Double the power output, cut the speed in half.  How, you ask, did he manage this physics-defying feat?
Enter the parachute…. 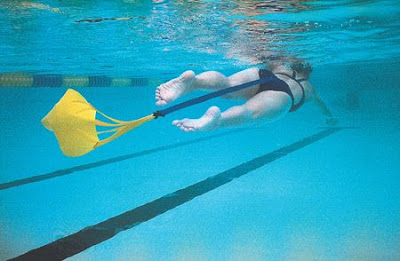 I had heard about this workout and was looking forward to it.  I thought it would be a fun change of pace.  Boy was I wrong.  The parachute is horrible, but not for the reasons you may think.  Yes, it adds quite a bit of resistance, but that’s not the worst of it.
We had three colors to choose from: yellow, blue and black – yellow being the smallest, black being the largest.
“Mike, what color do you want?  Blue?”
What I’m thinking is: No, I WANT yellow but you just offered that to the girls and asked me if I want blue.   So I said yes.  Of course I want blue.
So you have a strap around your waist and you drag the chute behind you to add resistance.  Simple enough.  The problem is that the cord for the chute gets tangled in your legs as you kick, so you end up kicking funny (wide, if that makes sense) and that throws off your entire stroke.  Soon your arms are countering the movements of your legs and your swimming sloppy, inefficient AND slow.  It’s a bad combo, if you ask me.  I need to work on my form and become more efficient so practicing bad form just to add resistance is a mistake, in my opinion.
I like paddles.  They add resistance AND help you focus on form.  If you have bad form, paddles will let you know in a hurry.  If you enter the water with your hand pointed down instead of forward you’ll rip the paddle right off your hand.  And they help you ‘feel’ the water so they improve your catch.  I say, forget about parachutes and grab the paddles and pull buoy for some added resistance in the water.  You’ll be able to focus on good form, efficiency AND you’ll build strength.  It’s a win/win….win.
Here’s my resistance/form workout I have scheduled for Friday:
1 hour 2800 Yards
Warm Up:
100 Swim/100 Kick/ 100 Pull/ 100 Kick
10x50 on 1:00 with paddles (focus is on good form)
Drills:
4x100 (Spear R, Spear L, One arm R, One arm L)
Main
4x50 Pull on 1:00
4x50 Pull/Paddles on 1:00
Pyramid (rest in parentheses)
50 (15”) 100 (20”) 200 (30”) 300 (30”) 200 (30”) 100 (30”) 50.
Cool Down
50 easy
50 kick

glad you put the straight goods out there on the chute! did paddles today for the first time, you r totally correct in how they force proper form. After 2000m I introduced the paddle part of the practice it was awesome! Look forward to following your progress towards your goal and learning more about IMWI from you! Cheers

Amiable dispatch and this post helped me alot in my college assignement. Thanks you on your information.