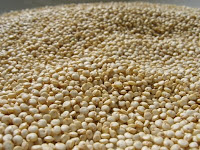 If you're unfamiliar with Quinoa, it's a grain native to South America.  The big benefit to eating quinoa is that it's the only grain that is a complete protein, meaning it includes all nine essential amino acids (essential amino acids are amino acids our body cannot produce themselves so we must get them through out diet).  This has made it a staple in a lot of vegan diets.

I like quinoa, but it's a little dry and flavorless.  That sounds bad, but it's not really.  Chances are you won't dislike quinoa, but you'll probably feel like it needs a little something for flavor.  So when I make quinoa I typically add cinnamon and dried fruit to it - cherries typically.  I've read that a lot of people mix eggs in with quinoa, so I think I'm going to try that.


In my searches to find ways to make quinoa a little more flavorful, I found this recipe for Quinoa Flake Bake (using Quinoa Flakes).


It's quick, simple and tastes great. 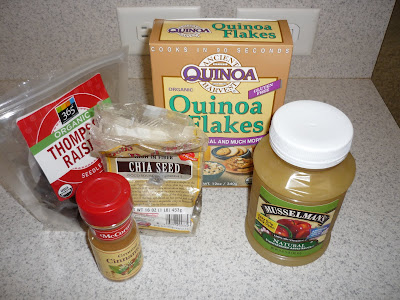 Quinoa Flakes, Chia Seeds, Cinnamon, Applesauce and Raisins.  That's all you need.
Ingredients
All you do is combine everything in a bowl.  I was making two flake bakes - one for me, one for Courtney - so I doubled up on the ingredients. 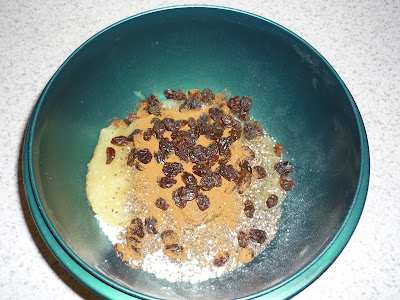 Mix everything together and then put it in a small dish.  I used a 16 oz CorningWare container that I coated with coconut oil. 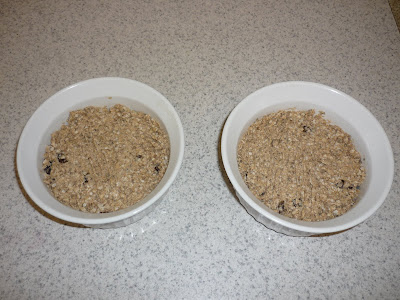 Then you put it in the microwave for about 4 minutes.  Since I was doing two, I did 5 minutes and they turned out fine.  I might play around with the time a bit to see how that affects it.  You know it's done when the top hardens a bit and the sides pull away from the dish. 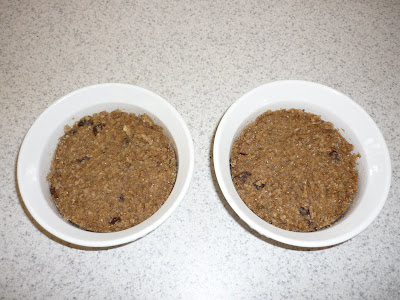 
I then took the flake bakes out of the dish and onto a plate.  I topped it with a few more raisins and some real maple syrup. 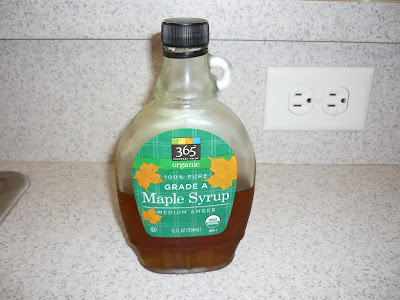 Aunt Jamima has nothing on this syrup, but it's really high in calories so I use it very sparingly...and it's really expensive.  If I remember right this bottle was about $15 at Whole Foods.

Each flake bake is about 350 calories, and since I need more than that for breakfast I made some scrambled eggs with rosemary, basil and a little goat cheese. 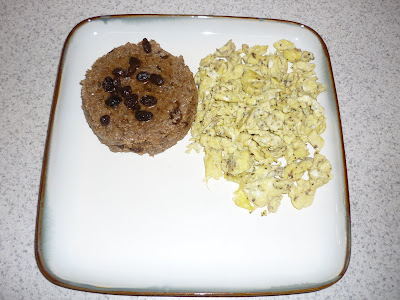 A healthy way to start the day.

The flake bake was really good, and I'll definitely make it more often.  I usually eat breakfast before going to work, but Courtney eats breakfast at work (she doesn't like to eat right away after waking up).  So I think this flake bake is going to work out.  I can make a double batch and cook mine right away and put a cover on hers and she can take it to work and nuke it when she's ready to eat it.

I love the quick, easy, healthy recipes.  I like to eat healthy and do enjoy cooking, but it's hard to find the time to make healthy meals sometimes so it's nice to have quick, easy meals like this to whip up when you don't have tons of time to cook.
Posted by Mike at 9:52 AM

This is a great pots where I found the preparing procedure of Quinoa Flakes. I need some more details.
Coconut Water

I think some other great food can be made by using quinoa and honey. The mixture of these two will give a healthy output.Manuka honey will be good for this.

Amazing blog! Do you have any recommendations for aspiring writers?
I'm planning to start my own blog soon but I'm a little lost on everything.

Would you suggest starting with a free platform like Wordpress
or go for a paid option? There are so many choices
out there that I'm totally confused .. Any tips? Appreciate it!

Feel free to surf to my page; biharfoundation.in

It's hard to find knowledgeable people on this topic, but you seem like you know what you're talking about!
Thanks

It's actually a nice and useful piece of information. I am happy that you just shared this helpful information with us. Please stay us informed like this. Thank you for sharing.

It's a shame you don't have a donate button! I'd most certainly donate to this outstanding blog! I guess for now i'll settle
for book-marking and adding your RSS feed to my Google account.
I look forward to fresh updates and will talk about this blog with my Facebook group.
Talk soon!

Here is my web site exercises to improve vertical jump

I think this is one of the most important information for me.