This was my second trip up to Door County for the triathlon, and I was once again impressed.  I thought they did a great job last year, but this year they outdid themselves.  The weather this year was brutal - low to mid 90s, very humid, sunny, light winds....tough day for a half ironman.  It reminded me of the conditions I had to deal with in Florida.  The race director added more aid stations and brought in more ice and water.  Well done.  If you're thinking about doing this race, you should.  It's very well run, and I've yet to hear anyone say they would never return.  The course is challenging but good. 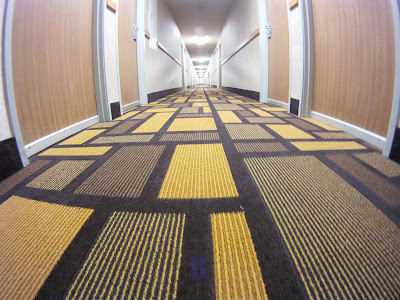 Wow.  Check out the carpet.

We went to the race site, got my packet and then headed to the hotel to check in.  Then we met my parents for dinner at Woldt's (right by the Comfort Inn).  Their hours are "7am - Close."  It doesn't get much clearer than that.

I've noticed I've been having some great workouts lately the day after eating red meat, so instead of the traditional pasta dinner the night before a race I went with steak and boiled red potatoes.   After dinner, we went back to the hotel and got everything ready and went to bed.

One thing the Door County Tri does that I love is assigned transition areas.  You might not get the spot you really want, but it's nice not having pressure to get there really early to get a good spot and then having a lot of time to kill.  And since the race didn't start until 8 am, I got to sleep until 5.  That's late for race morning.  We left the hotel about 6:10 and got to the race about 6:30.  It was already hot and muggy.  I got my timing chip, got body marked, set up transition and then headed out for a short warm up on the bike a little after 7. 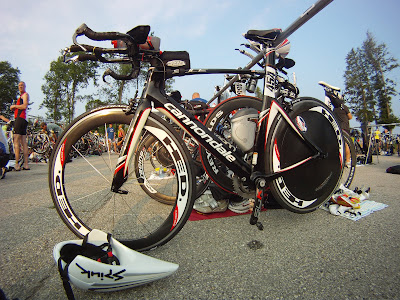 My bike in transition. 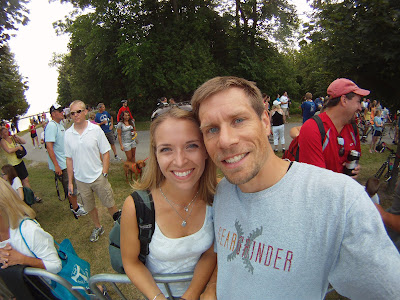 Just before heading out for my warm up.

The Swim:
This was the first race in quite a while that I haven't been in the elite wave.  I can't remember for sure, but I don't think they were going to do an elite wave when I signed up so I didn't have the option. They later added one (or maybe I just found out late - can't remember the details) but if you went in the elite wave you weren't eligible for age group awards (per USAT rules).  This rule makes no sense to me, but I'm not going to go on a rant about that.  I figured I wouldn't be in contention for top 3 overall, so it made more sense to go after an age group award.  So I was in wave 8 as opposed to wave 1.  It was a little weird having so much time to kill and actually watching the race for a while before starting.

The water was about 69 degrees which felt really good on such a hot day.  If I was a better swimmer I would have skipped the wetsuit.  I've been working on my swim lately (as usual) and had come into this race with a PR on my mind.  I recently swam a solo 1.2 miles at Devil's Lake in 31:30 on a calm day so I figured I'd shoot for a 31:30 with hopes of breaking 31.  After the swim start, you turn right and swim a few hundred meters and then turn around and swim a straight line to the shore.  I was hanging with the group the best I could and drafting as much as possible, but I noticed we were really cruising which told me we had a current.  That means that for the bulk of the swim, we would be working against the current.  I didn't give up hopes of a PR but knew it was going to be tougher than planned. 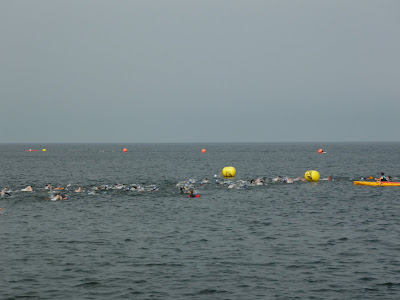 Early in the swim

I felt good in the water until the halfway point.  Some of the older athletes complained that they're always in the last waves and they're the slowest so they never see anyone on the course, so the race director put them in the first few waves.  That's great until you swim into the back of them because they're doing the breaststroke.  So I had to work my way through the slower swimmers from earlier waves, and that got tough at times.  I came out of the water in 33:18.

I noticed swim times across the board were slower than last year, so I'm using that to convince myself that I have in fact improved my swim and that it was just a tougher swim.  But no excuses.  I set out for a 31:30 and only swam a 33.  My work in the water continues.

Transitions are usually very smooth for me, and this one was for the most part.  But I stumbled as I got to my bike and smacked my lip on my brake lever and gave myself a bloody lip.  I don't know if I tripped on something or if I was dizzy from the swim.  It was weird.  That's never happened to me before (I have fallen down in transition from being dizzy though, but that was an aquathon so no bike to smack my face on - I was taking my wetsuit off and the next thing I knew I was staring at the clouds).  Time:  1:13

I went easy on the bike.  How's that for a change of pace?  I knew my run fitness was going to be lower than I wanted, but I still wanted to have a good run.  I'm tired of being the clumsy cyclist who sets a fast bike time and moves backwards on the run.  It's time to be a little more balanced, so I figured I'd back off on the bike and see what happens. Plus, with the heat I figured it would be a good idea and pay off in the end. I'm not sure it did, but I'll give it another shot on a day with better weather. 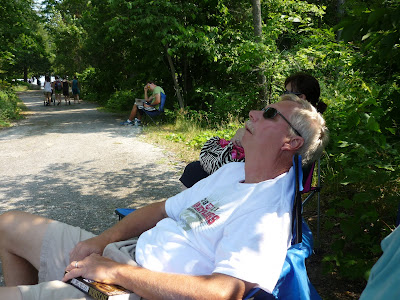 My dad finds the bike portion of a triathlon to be very exciting.

I rode 10 watts lower than last year and 25 watts lower than my training rides.  It felt a little weird to take it easy in a half, and I'm not sure I liked it (by easy, I mean easier...I was still doing tempo so it's not like I was putzing around).  I soaked myself with water at all the aid stations and tried to drink a lot but I'm not sure I drank enough water.  I had one bike water bottle, half a bottle of gatorade and 3/4 of a bottle of water.  I only drank half my Perpeteum so that was about 130 calories, I dropped my gel and ate one hammer bar.  With the gatorade, I probably had 300 calories on the bike.  I don't know why, but I hate eating and drinking on the bike in a half ironman.   I need to work on that...I said that going into this race and still screwed it up.

They had an aid station as you entered transition so I grabbed a bottle of water and dumped it over myself (why I didn't drink it instead I do not know).  I had a flask with gel, water and a salt pill so I took that (200 calories) and put on my shoes, grabbed my visor, race belt and fuel belt and headed out on the run feeling really good.  My legs felt great and I didn't smack my face on anything this time.  Time:  1:09

The run started out a little rough.  My legs felt good, but I quickly developed a horrible side ache that forced me to walk a couple of times (outside of my planned run/walk).  I think the side ache was from my Perpeteum.  Heat and Perpeteum don't mix well, and even though I froze it the night before I think it got hot and went bad.

By mile 5 of the run, my side ache felt better and I dropped the pace from 7:45s to 7:30s.  I was in a great mood and loving the race.  The heat wasn't bothering me at this point.  The first big hill before running back into Egg Harbor was brutal, but I survived it and looked forward to running back into town where I was sure Courtney and the family would be.  I ran past them smiling, soaked my head in a sprinkler and went on my way.

By mile 9 my pace was slowing and fatigue was setting in.  The big hill at mile 10 was brutal.  I ran most of the way until I realized I wasn't catching someone walking, so I walked the hill.  At the top, I figured the last 3 miles wouldn't be too bad since the big hills were now behind me.  Wrong I was.

The last 3 miles of this race were a hell that cannot be described.  No shade, no spectators, no nothing.  I could feel the heat radiating off the road, and I was beat down and tired.  I had only taken in two gels during the run and had only had about 30 ounces of water at that point.  I was tired, over-heated and dehydrated.  I was struggling.  I was thinking about Kona.  I wondered how I could possibly run a marathon in heat like that.   I wanted to walk to get my heart rate down, but I wouldn't let myself.  "This is Kona training," I told myself.  I pushed hard, real hard, and only managed an 8:20 pace.  I wondered how people make it through Badwater.

I hit the final aid station, took in some water and soaked myself down and walked for a minute (my walk breaks are supposed to be 30 seconds).  Then I dug deep and finished off the race.

My goal for this race was to break 4:30, so I came up well short of that goal.  But it was a tough day and a lot of people struggled.  My time was good enough for 10th overall and 2nd in my age group so I'm happy with that.

My quest to break 4:30 on a legitimate course continues (I broke 4:30 at the Spirit of Racine a few years ago but those who did that race know that wasn't legit).

Right after crossing the finish line there was an ice bath available.  It had a lot of ice in it, and I was a little nervous to climb in.  I love ice baths, but this looked cold and I was really hot.  To make matters worse, there was a camera man there filming me.  I tried to look calm and casual, but I don't think I pulled that off.

Overall I'm happy with how the race went.  I didn't hit my goal times, but it was a tough day so I'm not going to beat myself up over it.  I got to the finish line, got an age group award and didn't have any knee or hip pain.  This injury may finally be behind me.

The AC in my car broke about a week ago so we had to drive home from Door County (3.5 hours) in 94 degree heat and humidity with no AC.  It was as tough as the race.  And to make matters worse, it turns out spectating at triathlons is dirty work.  I had to drive home with these feet: 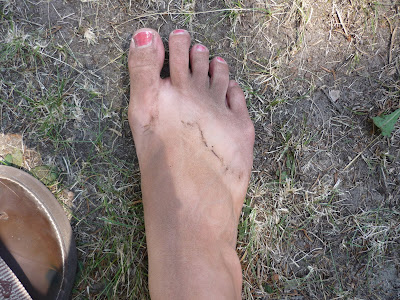 Next up:  Janesville Twilight 5K.

whoah this weblog is great i love studying your posts.
Keep up the great work! You realize, a lot of people are searching around for this info, you can aid them greatly.
Also see my website - electronic cigarette wholesale