Saturday morning was the Pardeeville sprint triathlon - 1/4 mile swim, 15 mile bike, 3.1 mile run.  After the race in Janesville last week, I was really itching to get out and race again.  I woke up at 3:45 am ready to roll (no, I didn't set my alarm for 3:45 - just anxious).  I got an early start to my pre-race prep and while I wasn't the first bike in transition, I was the first bike on the elite rack.  I won the race to transition. 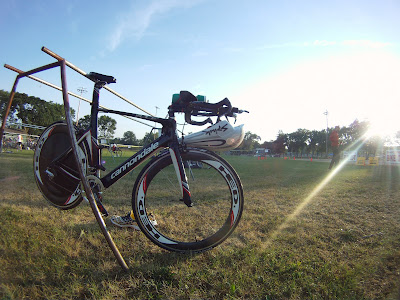 Before I go into my race report, I want to say two things.

1. This was my first time racing Pardeeville and it's a great race,  I loved the course and will most likely return next year.
2. Pardeeville is nothing like Margaritaville.

The Swim:
Not a whole lot to say about the swim.  I started right behind a guy who used to swim with on the Swimfast group hoping I could stay on his feet the whole time and get pulled to a solid swim.  Not a chance.  He set the second fastest swim and I set the 19th fastest.  I'm working on my swim and absolutely refuse to give up on this sport, but it continues to be my weakness.  It's time to start hitting the swim with some of the volume I do on the bike and run.  If I slack off in my training, it's usually in the swim and my results reflect that.  So it goes. 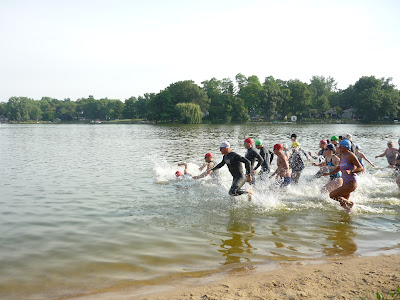 My first thought when I saw this pic was "where the heck is the guy in the QR wetsuit going" but then I remembered the first buoy was to our left so he's not really going the wrong way. 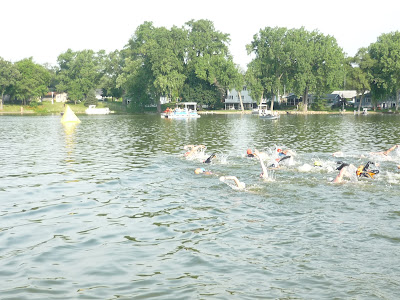 The elite wave swimming toward the first buoy. 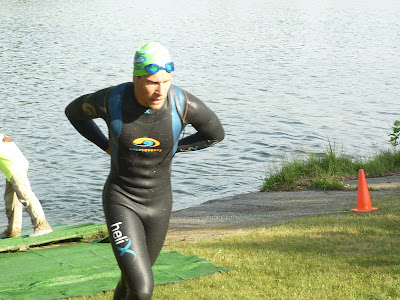 Courtney did a great job getting pics today.

When I came out of the water I was unzipping my wetsuit when a volunteer grabbed my arm to help me out of the water.  When he did that, the cord to my zipper slipped out of my hand.  In the above picture you can see me trying to find it to finish unzipping my wetsuit - it's sitting on my shoulder.  There's a fairly long run to transition so I eventually found it and got my suit unzipped before getting to my bike, but I was freaking out for a little while there.  I thought I was going to have to bike in my wetsuit. 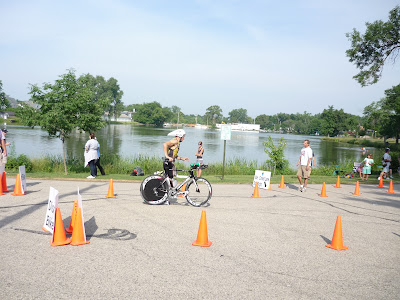 Coming out of T1 heading out on the bike.
The Bike:

The bike was pretty good.  Much, much better than last week.  I started out easy and settled in, then picked up the pace.  I made up ground quickly and had the lead group of 3 in my sights by the 5 mile mark...or what I thought was the lead group.  It turns out there was one guy, Dale Humphrey, out front.  Once I got close to them, I couldn't catch them.  I made up a little ground but couldn't close the gap.  It was a little frustrating. I pushed a little harder, but the gap remained about the same.
Overall, my power was still lower than I want for a sprint tri, but much higher than last week and I was able to push the whole time.  I probably could have gone faster, but I wanted to save something for the run.  I wonder if I would have been able to put out more watts if I hadn't done my long brick on Wednesday, or if it's more a matter of a lack of intensity in my training.  I don't do a lot of intensity - especially this year with my injury.  I'm not saying I had a bad bike - 4th fastest - and I'm happy with it.  But I feel like my sprint tri power should be higher when compared to my threshold.  Something to work on, I guess.

Again, pretty quick at 51 seconds.  7th fastest.  I struggled to get in one of my shoes and that cost me a few seconds. 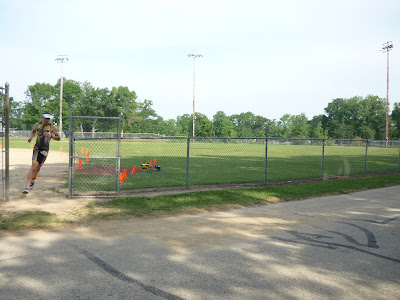 Running out of transition.

The Run.
This year, this is where I get nervous.  Is my knee and hip flexor fully healed?  Will I reinjure it?  Am I being stupid doing this race?

As it turns out, I had a decent run.  Like every sprint tri, the beginning of the run was a little rough.  It's a tough transition and it takes me a little while before I feel good running. 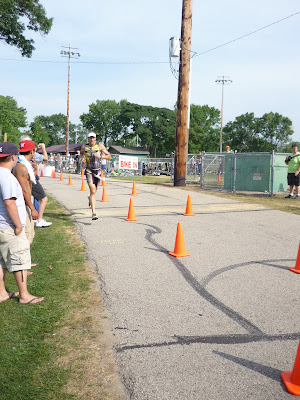 I started the run in 5th and could see 3rd and 4th in front of me.  I really wanted a podium spot, but catching 3rd was going to be tough.  He had a decent gap.  4th was pretty close so I set my sights on that.

For the entire run, I was uncomfortable and my legs felt weak - like jello.

[edited to cut out the part about me whining about losing run fitness to an injury...you've read about it already]

I kept thinking about the Footlocker cross country race I did last fall and how uncomfortable I was the whole time.  If I could do it then, I could do it again.  I kept on pushing and eventually caught and passed 4th place.  The course was an out and back so I saw 3rd coming toward me.  He passed a for sale sign in someone's yard so I checked my watch.  I hit that sign about 45-50 seconds later.  That's a lot of time to make up in the second half of a 5K, but it's not impossible.  I dug deep and pushed hard. 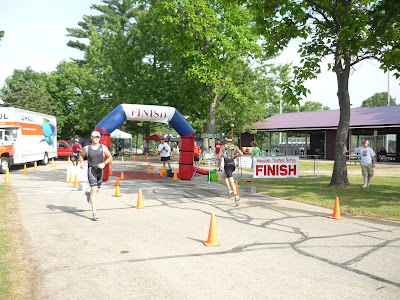 I finished in 1:05:18.  4th overall.  1st in my age group.  I had tons of fun and felt like I was racing and pushing myself the whole time, unlike Janesville where I had troubles on the bike.  So that was encouraging and fun.  I really wanted a top 3, but 4th is good and I'm happy with my run.  I've only been running again for about a month so breaking 20 minutes is encouraging.  And best of all, no knee or hip pain. 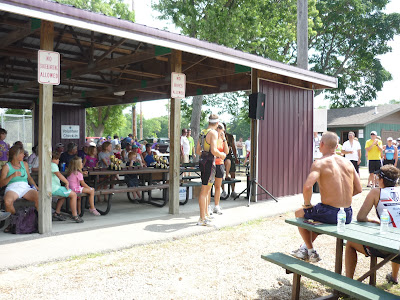 Getting my age group award.

I don't know if it's because I missed some races and training due to my injury or what it was exactly, but the past two weeks of racing have me on a triathlon high.  Being back at the races and taking in the atmosphere have really reminded me what a great sport this is. I'm sure the great weather helped too.

This race was really well run, the course was fun and the competition was tough.  But best of all, it seemed like everyone was having a lot of fun.  Lots of smiles and laughter and bench racing.  I felt great.  I was happy about my race and feeling like I can go faster with more and better training.  I want to be really, really fast, but at the same time I love leaving the races feeling like I can go faster and that I haven't reached my potential.  It drives me to push harder and harder.

As we were waiting for the awards, I looked around and saw everyone enjoying the race and thought, "triathlon makes people feel good about themselves."  And that's why, as crazy as some people think this sport is, we keep coming back for more. And that's what makes it such a great sport.

Nice job Mike! Been following you for about a year actually. Always cool to see you rip apart another race and it was awesome seeing you KQ @ IMWI last year.

Thanks for stopping by my blog a few times. Just saw your latest comment on my goals post for Lake Placid.

I determined by IM bike power through my last 4 long rides. @ 180 watts I was holding about 20mph on the flats, but wasn't doing too well on a brick run. I held back to 170 watts on my last 4 hour ride and I had a much better brick run that felt sustainable.

Shoot me an email to campbell.jon@gmail.com. Would love to hear any other thoughts you have re: power in an IM.

Like every sprint tri, the beginning of the run was a little rough. It's a tough transition and it takes me a little while before I feel good running.

Congratulations! Finishing 4th overall in this triathlon race is a great performance. This sport is really addicting and we really agree that triathlon makes people feel good about themselves.