If you've been following my blog for a while, you probably know this hasn't been the year I hoped it would be.  I worked very hard for three years to get a Kona slot and really wanted to put in a 4th year of very solid training so I could go into Kona in the best shape of my life.  I won't say all hope is lost, but this injury has set me back quite a bit.

The worst part about the injury wasn't the time off from running. It was the ups and downs as I tried to start running again.  I'd have a good day or two, then I needed a day or two off because my knee and hip flexor had me limping around.  Rinse and repeat.  It's frustrating and really tough on a person's motivation.  I've done my best staying motivated the past couple of months as I battled this injury, but it hasn't been easy.

But that trend is changing...quickly.  On June 26th I did an 11.5 mile run and was completely smashed.  I couldn't believe how much endurance I had lost.  I was absolutely worthless all evening....but my knee and hip didn't hurt.  A glimmer of hope.

Then two days later I did a tempo run and felt good.

Then on July 2 I did the Janesville triathlon and did better than expected and again my knee and hip felt fine.  The constant small twinges of pain in my hip were now few and far between. 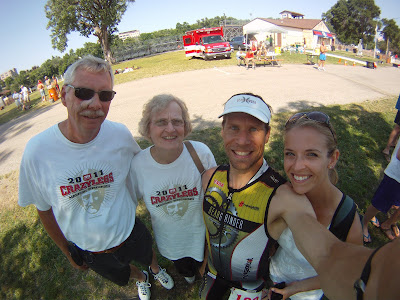 My parents, me and Courtney after the Janesville Tri.

The following day I ran 15 miles at an 8:14 pace.  Slower than I'd like to be running this time of year, but I survived.  I had some aches and pains, but they disappeared quickly.

Then, yesterday, I did my last (and only) key workout for the Door County half.  I did tempo on the bike (upper tempo - about 10-15 watts above half ironman power) for 3 hours and then did a hilly run.  I was hurting when I got off the bike so the run was really tough.  But I had no knee or hip pain.  It wasn't my best brick ever, but it was my best of the season.

I absolutely love racing.  It's why I train.  When I raced motocross years ago, I raced every weekend from March through October.  I'm used to racing a lot.  When I got into triathlon I was very surprised to learn that a lot of triathletes train all year and only race a couple of times.  I need more return on my training investment.

So I signed up for the Pardeeville sprint triathlon Saturday.  Then the following weekend is the Door County half ironman.  Later in the month I'm doing the Janesville Twilight run (5K) - I do this race partly because it benefits Alzheimer's and my grandma died of Alzheimer's.  Then the end of the month is the Double Bong 40K time trial (ouch).  And I found another sprint tri in August I'm going to do.

Then it's all Kona training.

On a completely different subject, one of Courtney's co-workers said he had some extra rhubarb.  He gave us a little bit a few weeks ago, so we asked if he had some more. 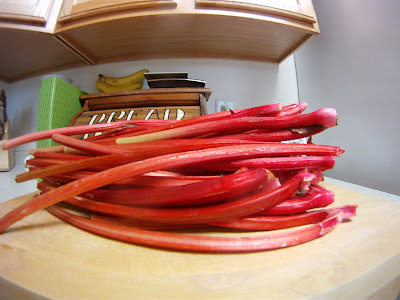 That's a lot of rhubarb.  Time to make muffins....a lot of muffins.  Luckily, I like to add it to salads so my salads are going to have a bit of a kick for the couple of weeks.

thanks for the positive comment, I needed it! looks like you are coming back around just in time for the kona build- you are goingto be right on time. good luck at the upcoming races and look forward to meeting up in kona! this is my first one too! post pics of the door county half, always wanted to do that one. grew up in mke (cedarburg) even though I'm a florida girl these days.
that rhubarb looks delicious!!