Yesterday was the Janesville Triathlon, my first triathlon of the year.  It's a sprint tri with a 1/2 mile swim in a river, 14 mile bike with some rolling hills, and a 3.1 mile run (it was longer but I'm not sure on the exact distance) with a pretty good hill about a mile into the run.  Being a river swim, there's a time trial start so we hop in one at a time rather than the usual wave start sending about 50 triathletes at a time.

I was really nervous going into this race for a couple of reasons.  It was my first tri of the year, and only my second multisport race of the year so that had me worked up.  But mainly I was nervous because I didn't know how my leg would hold up.  Lately, my knee has been doing really well but my hip flexor has been giving me a lot of problems and that's what I thought would act up.

Pre-race, I made a mistake.  I gave up caffeine last October, but I still use it occasionally for key workouts.  So I had a Red Bull about an hour before the race.  I've used Red Bull before time trials and tempo rides without problems, but for some reason it gave me big problems yesterday. 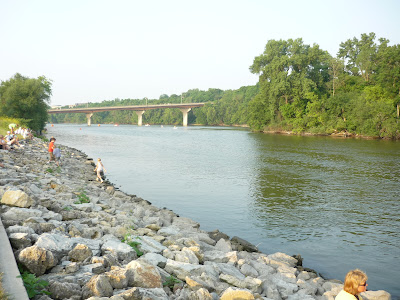 The swim takes place in the Rock River.  I wanted to get in line early and get toward the front (top 10 was the goal) but the line formed so fast I ended up about 30 deep.  They sent people every 3 seconds so I didn't have to wait too long after the start. 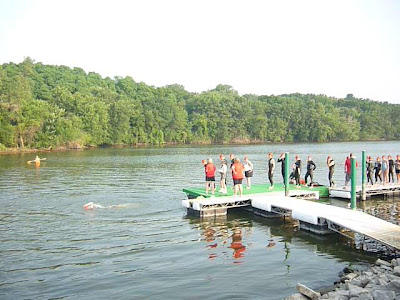 The swim start.
There's not a whole lot to say about the swim.  There's a current so you get a push, but it was nothing like last year so swim times were slower than last year.  I tried to keep pushing myself and swimming hard.  That's easier for me with the wave starts since I have people around me to chase the whole time.  There are people in the river, but I felt alone quite a bit more so it wasn't the same.  Plus I love the feeling of head to head racing you get starting in a mass start.  But it is what it is and it's the same for everyone.  My time was 9:31, which might have been an improvement over last year.  I'm not sure since everyone's time was slower (last year I swam an 8:45). 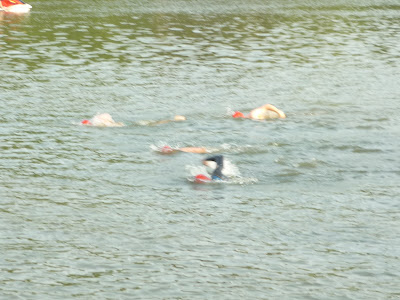 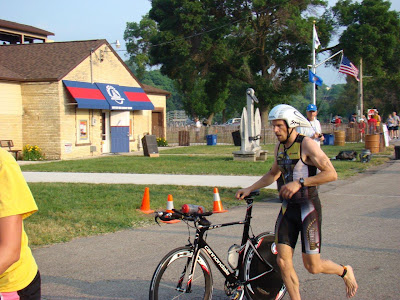 Running out of T1.
Normally the bike is my strength.  It's where I make up my time (make up for my swim).  I love it.  But yesterday I struggled, and struggled big.  I ended up 40 watts lower than I should have been, and it was my worst triathlon bike leg ever by more than 25 watts.  I don't know what the deal was exactly, but I'm pretty sure the Red Bull was to blame.  I started easy, about 30 watts below my goal to get warmed up and then I was going to hammer hard figuring my run would be weak so I would need an especially strong bike to finish well overall.  But a few minutes into the ride my heart rate was so high I could barely breathe and my vision was a little blurry.  I tried to push through it and relax, but I couldn't.  I had to take a break and get my heart rate down.  So I sat up and, of course, did that right in front of a friend's house who was out taking pictures.... 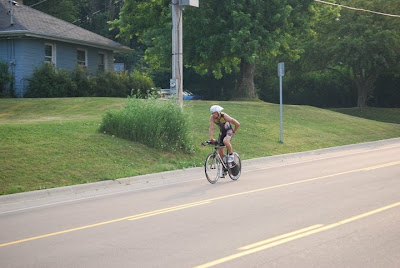 Trying to catch my breath and get my heart rate under control.
After resting, I tried to hammer again and the same thing happened, so I was forced to take a second break.  After that I rode tempo for a while.  My average power was below half ironman power so I was pretty frustrated (I was averaging 234 watts at this point - two weeks ago I did a tempo ride where I averaged 250 watts for 2.5 hours so it was killing me to see a number so low).  I hadn't passed a single person and for the first time in a multisport event I was seriously struggling on the bike.  About 8 miles in I started feeling a little better so I stepped things up a bit.  I began to reel in a few riders.  About the 10 mile mark, I started to feel pretty good so I increased my power a little more.  I caught and passed a couple of riders, including my teammate Robbie. 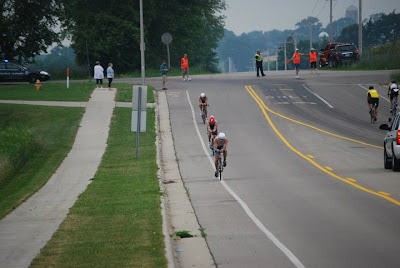 I'm third in line...feeling good here and about to pass these two.
We had a tailwind on the way back in so I was finally feeling good and pushing my power and I was now spinning out and running out of gears.  I was in my 50-11 spinning at more than 100 rpms.  I'm kind of a slower cadence guy (85ish for a race like this) so my legs were burning from spinning so fast.  But it felt good to have my heart rate back in check and to see some decent power numbers on my computer.  In the end, I only managed to average 242 watts (I was mid 270s last year so this was a big disappointment for me).  Coming into T2 I was really surprised to see the leader heading out on the run.  I was in second place, but being a time trial start I figured there were faster guys who started after me and that I was actually well out of the top 5.
My time was 36:35, two minutes slower than last year.
The Run:
This was the unknown for me.  I've been running for two and a half weeks now so my run fitness isn't very high so I anticipated struggling.  I was okay with that.  My only hope was that my hip flexor would hold up so I could push as hard as I could and not have to deal with pain and injury.  Early into the run you run right through the middle of the farmer's market and that's a blast.  Everyone is cheering and it really makes this event fun.  After the farmer's market is a long, tough climb and I was really suffering.  I was surprised no one had passed me at this point, and I began to wonder if I was going to crack the top 15 overall.  My run felt slow and my legs felt heavy.  But my hip flexor didn't hurt and my knee felt rock solid.
I checked back a few times and eventually saw my teammate Robbie closing in.  When Robbie caught me, I told him the leader wasn't that far up the road and that he needs to dig deep and run hard.  I thought Robbie had a real shot at the overall.  Robbie passed me and I decided to try to stay on his heels as long as possible and push him, help him make up some time on the leader by forcing him to dig deep.  I figured he'd eventually pull a big gap on me, but I wasn't going to give it him.  I was going to make him work hard.
The pace was fast and I was immediately uncomfortable.  But I settled in a bit just as Robbie put in a surge to lose me.  I closed the gap and kept telling myself to stay on his heels.  He surged again....then again...and again...I kept hanging on and actually began to feel more comfortable than I was early in the run.  I moved up side by side with him and we ran back past the transition area, past all the spectators, side by side.  Teammates battling head to head.  It was awesome, and will probably remain a favorite triathlon memory of mine for a long time. 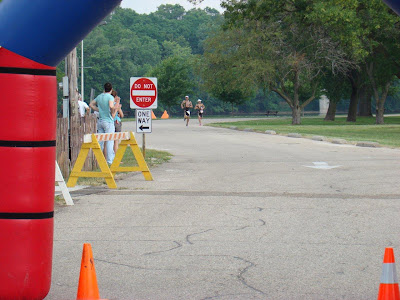 Me and Robbie, just after I put in a surge toward the finish line.
The crowd was cheering and we had about a quarter of a mile to go.  I had hung with Robbie long enough that there was no way I was going to give this one to him.  I thought he had a lot more in him, and since he's fresh out of high school where he ran cross country I began to wonder what his strategy was.  He was holding the pace steady and I was wondering how hard he can kick at the end.  The run finishes by running around the park so we were on a curve circling around back toward transition.  I took the inside line close to the grass and tried to keep Robbie on my right forcing him to run a longer line. When the finish line was finally in sight I expected Robbie to go.  He didn't....so I did.  I thought it might be too early, but I had to know if he had anything left.  I put in a hard surge, looked back and saw a gap.  So I dug deep and pushed hard all the way through the finish for second overall and first in my age group. 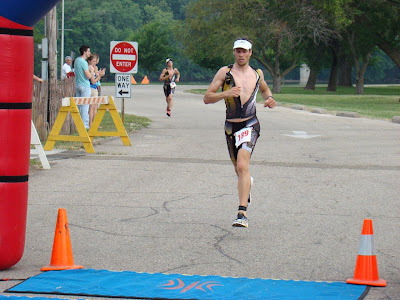 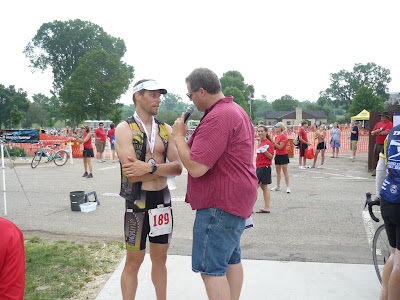 I got interviewed for taking second overall.
My time on the run was 21:12, which surprisingly was one second faster than the winner who outran me by about two minutes last year.  I have no idea what my pace was because they changed the course a bit so it's longer than a 5K and I don't know the exact distance.  I wish I knew so I could compare my pace to last year, but I guess it doesn't matter.
Overall, I had a lot of fun and I'm happy with my performance with one exception:  the bike. I was two minutes slower than last year and my bike fitness is higher this year so had I been able to put in a better effort I may have had a shot at the overall (I finished 39 seconds behind the winner).  It's frustrating.  But I got a race under my belt this year and didn't have any issues with my leg.  I had some low points, but I also had some highs by being able to respond to Robbie's attacks and that was a lot of fun.  That's what racing is all about.  That's why I do these sprint tris. 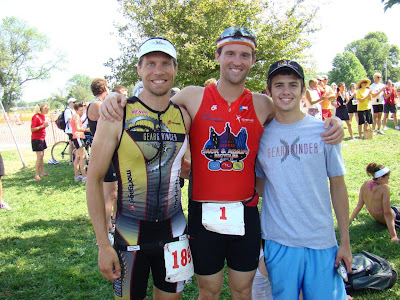 The top 3 overall.
This gives me some confidence going into my final two weeks of training before the Door County Half.  I survived a 5K, but can I survive 13 miles?  The suspense is killing me.  Only two weeks left to find some fitness.
Posted by Mike at 9:18 AM

what a amazing competence, I think it is one of the hardest competences of the world, the most difficult part is the swimming..