It's been a really long time since I've raced.  My last race was the Great Floridian back in October.  As much as I love training, I really love racing so it felt great to get out and run hard.


The Shamrock Shuffle isn't a 5k you're going to set a PR at.  You have to climb Observatory Hill...TWICE.  That's A LOT of climbing for 3.1 miles.


The race starts in  downtown Madison on State Street, which is a gradual downhill, so the pace starts out pretty fast.  I did the unthinkable on Saturday - a 5 hour trainer ride (not recommended) - so I was a little concerned about my legs holding up on the hills.  I wanted to go out easy(ish) and hopefully pick it up a bit toward the end.  I went out at a 5:45 pace.  So much for easy.


I run with a Garmin so I saw early on that I was running too hard so I backed off. Once I dialed it back to a 6:15 pace I was amazed at how many people were passing me.  I started questioning my watch.  Was I really running a 6:15 or was I running an 8:15?  People were flying by me....


After that, the course flattened out quite a bit and I settled into my pace and tried to save a little energy for the second climb over Observatory.  My legs were holding up pretty well, and I made up a few places as people faded.


The second climb was tough, and I was starting to feel the fatigue.  But once at the top, you descend and then head down State Street to the finish.


I finished with a time of 20:12, 16th overall, 5th in my division.  I'm really happy with my time, and I'm especially happy because my average heart rate was only 89% of max.  That's high, but I'm typically around 93-95% for a 5K.   I think my legs were too tired to allow me to work hard enough to get my HR that high, which makes me think I might finally break my 5K PR this year.


Courtney and Erika (Courtney's best friend...I mean BFF) also ran the race, their first 5K.  Their first running race ever, actually.  They certainly didn't pick an easy one for their first race, but they gutted it out and did really well.  Courtney struggled a bit on Observatory toward the end and that gave Erika a chance to pull away so she finished 30 seconds ahead of Courtney.


Their goal was to run 10 minute miles, and Erika finished with a 9:30 pace and Courtney finished at a 9:41 pace.  As far as beating goals goes, they dominated the dojo.

My goal was a sub 6:30 pace, and I finished with a 6:30 average exactly.   So they win.  And like the OCD triathlete I am, I had to take off to get in some more training.  They went to the bar and drank green beer.  They win again. 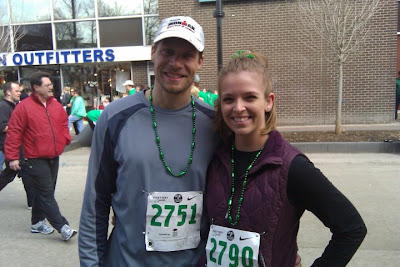 Me and Courtney after the race. 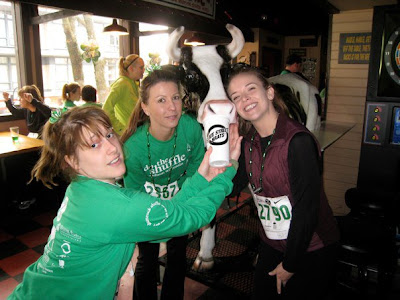 The girls drinking green beer at the bar (while I run).

Congratulations to all three of you. Again, as one of the non-athletic types of the world, I am suitably impressed!