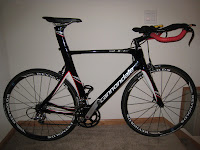 Since the time trial last weekend, I decided I need to spend a little time working on the set up on my Slice (aka The Slicer). I moved the saddle back a little so it wouldn't be quite so different from my road bike. It's still quite a bit further forward than my Peloton, but now the difference isn't so drastic and it feels a little better.

I also moved the aerobars down a little. I had them angled up a little, and it was putting my wrists in a bad angle and causing my forearms to get fatigued. I don't know if this will be any better, but I'll find out this weekend at the Harvard TT.

I also decided to wrap the aerobars tonight. I think this will be a little more comfortable on long rides and it will protect the cables, which were exposed a little on the underside of the aerobars. I also bought a new computer mount so I could mount my computer on my aerobars. I had it on my stem, but it was really hard to see. The new wrap.... 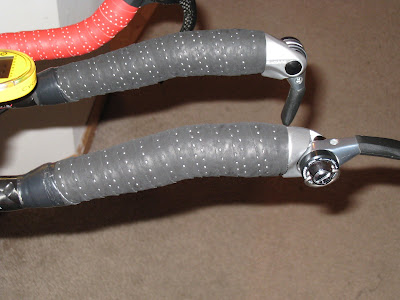 Here's the new computer mount. It should be easier to read and easier to toggle between screens without getting out of the aerobars. I'm a little concerned it might move when I hit the buttons for an interval though. The mount won't go as tight as I would like it. 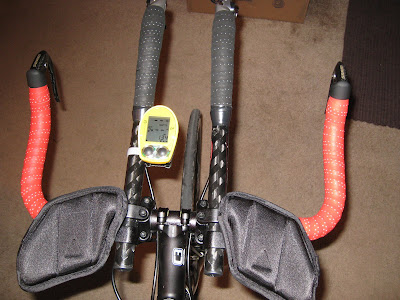 This is why they call it the Slice. Check out how thin this bike is. And, yes, it does slice through the wind. I can't get over how fast this bike is. It's so easy to go 20+ mph. 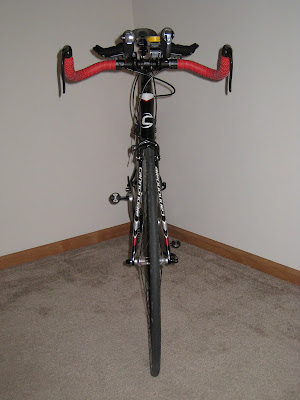 I got out for 2 rides on the bike this week so I could start dialing in the fit and getting used to the new position. Now that I'm getting more comfortable on it, I'm having a lot of fun riding it. It's a lot more different from my road bike than I thought it would be. I thought when I got this bike, I would fall in love with it and not want to ride my road bike anymore, but that's not the case at all. I still prefer my road bike. TT bikes are fast and fun, but I couldn't imagine having to ride one all the time. They don't climb that well and it's hard to react quickly to something in the road if you need to. And it's only really comfortable when you're in the aerobars. Plus, I would never ride this bike on a group ride (except for maybe a ride with triathletes where we don't plan on getting a pace line going) and group rides are fun.

I mapped out a 20K TT route that I can ride at lunch. It's about 3 miles from the office, so the total ride comes to just under 20 miles. It starts on Seminole (one of my favorite roads to ride) and turns down Whalen, which has a couple of hills and is part of the Ironman route. Then I take Caine down to Hwy M, to Fitchburg, back to Whalen and then Seminole. I've ridden it twice now and it's not bad. The only negative to it is that you have to cross Fish Hatchery Road twice, which can be pretty busy so I may have to wait for traffic. Other than that it's a decent route. 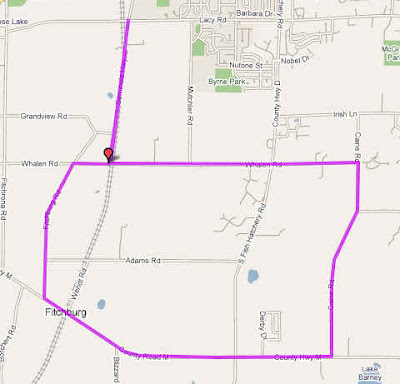 I took it easy and rode at a comfortable pace. I didn't want to wear myself out before Crazylegs and the time trial this weekend. I just wanted to get more time on the bike and get used to the aero position.

nice bike Mike, The Slicer is meaner than a joke about children with learning difficulties.