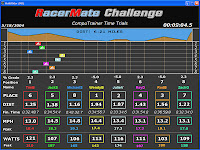 I did an indoor time trial this morning at SBR Coaching, which is only a few minutes from my house. I didn't know what to expect since I've never done a time trial, indoor or outdoor. And they do them on Computrainers and I've never ridden one before.

I had no idea what average watts I should shoot for. It was only a 10K, so it was short and intense. Yet, it's still long enough for you to blow up if you go out too hard. And the course was rolling hills - and finished uphill - so you had to save a little extra for the hills. I looked at the watts from some of my previous rides and decided to shoot for a 300 watt average.

The heats are supposed to be 4 riders, but one of the guys in my heat did a little too much drinking last night and showed up late so he opted for a later heat. So there was just 3 of us. Right off the start I was doing about 350 watts and I was going about 24 mph. I checked the screen (example of the screen pictured) and the dude next to me was doing 31. I looked over and he didn't look like he was working that hard. Unreal. The other guy was going a tad faster than me. It shows how far behind you are and I was only a few feet behind him so we were basically running the same speed. I tried to ignore the guy next to me, but when I checked again at about the .5 mile mark he was still over 30 mph. This dude is superman, I thought.

That's about the point he had the girl running the TT come over and check his set up. It turns out his trainer wasn't calibrated right or was malfunctioning or something. So eventually he pulled out and it was the two of us. I was a little happy to see that because he was making me feel like a squid. I eventually pulled a bit of a lead on the other guy and won the heat. I think my average watts were 277 and my average speed was 22.4 mph. I can't remember. They haven't posted the results yet, and I forgot to hit the interval button on my computer at the end of the TT so I screwed up my data by doing some light spinning to cool down.

I was in the first heat, and there were supposed to be a total of 15 people competing so I have absolutely no idea how I did. I hope I did well, but I'm not that concerned about the results. I'm mainly doing these time trials to help motivate me and give me a way to see how I'm progressing through the winter.

I wouldn't say I held back at all - although I did try to pace myself - but I think I could've pushed a little harder and gotten my average watts up closer to 300. I don't think I pushed hard enough on the downhills (if you've never ridden a Computrainer, the tension increases on uphills and decreases on downhills). I used the downhills to recover from the uphills and I think I could've pushed a little harder on those. It was pretty short so you can push pretty hard without completely blowing up.

They have another one in January and my Ironman training officially begins Monday so I'll go into that one with a little more training under my belt and a better idea of what to expect. I think I'm going to shoot for a 300 watt average on that one.
Posted by Mike at 5:48 PM