I've been spending some time rethinking my nutrition strategy for Ironman this year, and I think I'm going to go back to something similar to what I did in '08.  Last year worked well, like '08 did, but I think I might try all liquid calories again (I'll still work in some sportlegs - and a 5-hour energy - seriously, try it before a long tempo ride, it works great - but I'm going to do my best not to need sodium pills).  Fig Newtons are a pain to carry.  The main reason I went with them last year was because gels were bothering my stomach, but I think it was Powerbar gels and not gels in general.  I ran out of Powerbar gels and have been using Hammer gels this year that I got at races and they don't bother my stomach.

Last year I did a mix of Fig Newtons and Inifinit on the bike, and Powerbar gels on the run even though they sit in my stomach like a sugar bomb.  By the time I realized it, I didn't have enough time to come up with a new plan.


In '08, I did a mix of Perpeteum, gels and Gatorade Endurance Formula.  This year I'm thinking about using Inifinit, gels and some Heed and/or Gatorade.  Infinit will be the bulk of my calories on the bike, and I'm going to experiment with it on the run but I'll probably do Heed (or Gatorade if I grab it from the course - I can drink Heed or Gatorade without stomach problems) and Hammer gel.

I switched to Infinit last year mainly because Perpeteum goes bad very quickly.  On a hot day, by the time I got to my second bottle it was spoiled and bothering my stomach.  Infinit doesn't go bad and you can customize your formula, which is very cool.

Based on a great interview with Asker Juekendrup on Competitor Radio (for anyone doing long course tris, this interview is definitely worth a listen) I decided to tweak my formula  a bit.  I cut out the protein because it's a bad fuel and it foams when it comes in a powder form so that makes mixing Infinit difficult.  I also upped the calories a bit.  The rest of the formula is essentially the same: 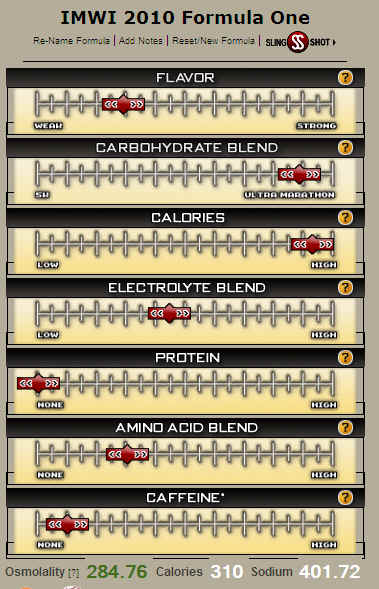 My calories on the bike will come primarily from Infinit, but I'll probably do a couple of gels if I think I can take in the extra calories without problems.  It's easier to digest calories on the bike than the run so I'm going to get in as many as I can so I'm in good shape calorie-wise when I start the run.  I'll have my bottle of Heed I always run with and Hammer gels on my race belt.  I'll probably put a second bottle of Heed in my special needs bag.  I can drink Gatorade, but I prefer the watered-down flavor of Heed while running. [They raffled off some tubs of Heed at the tri this weekend and I really thought I deserved to win one since it seemed like I was one of the only ones there who actually likes the flavor....no such luck.]
As always, I'll only drink water for the first 30 minutes of the bike to let my stomach transition.  Then I'm aiming for 350ish calories per hour on the bike (about 50 per hour more than previous years).  This summer I'm going to experiment with pushing that closer to 400 to see what happens.  Like Crono's plan with bike fits, find the limits.
The final 30 minutes of the bike will be water only.  I'm thinking about going for about 200 calories on the run per hour, which will come from Heed and gels.  I've always done gels whenever I feel like I need calories, and this year I want to come up with more of a set plan for the run so I have some work to do there.
I want to cut out the salt pills as much as possible because I think most endurance athletes overdo them (I'd link to the Joe Friel interview but I can't find it), but I'll still have my emergency pill canister on my race belt with salt pills, Advil, Pepto pills and Immodium pills in case the shit seriously hits the fan, so to speak.  I've learned that when you start to beat yourself up mentally, you're most likely just low on electrolytes and that's a good time to take a salt pill.  I'll get more electrolytes on the bike from the Inifinit so I shouldn't need to pills then, but Hammer gel doesn't have a ton of sodium so I may need some salt pills on the run.  If you're curious, I prefer Saltstick tabs because I think they have a better electrolyte balance than other pills.
For those doing long-course triathlon looking for nutrition advice/resources, here are a few sites you might find helpful:
Tri-Talk Nutrition Calculator

http://www.hammernutrition.com/knowledge/
Posted by Mike at 6:36 AM

Great Blog, I just found it by accident!

It's funny you should ask, I just picked up the newest edition of that book. It's great. I think I wore out my other copy and I'll probably do the same with this one even though it's not that different.