I think the toughest workout is the long brick. Not just because it includes more than one sport and is, well, long but also because it brings into play two of the most challenging aspects of triathlon: nutrition and pacing.

Tomorrow is the last of my two *key* workouts before the Great Floridian. Aside from the Ironman last year, this will be my longest training day ever. 30 minute swim, 112 mile bike, 13 mile run. It's about getting in a lot of volume and training my body to go for hours on end, but it's also about testing my nutrition and pacing strategies, both of which I have recently made changes to.

I've been using a mix of Perpeteum, Powerbar gels, Gatorade Endurance, water and Saltstick caps. I've decided to throw that entire plan out the window and start over. Crazy? Maybe.

The new plan is built around a new product for me: Infinit. It's similar to Perpeteum (except it doesn't go bad in the heat and doesn't have soy) but allows you to customize the formula to meet your individual needs. Here's my formula: 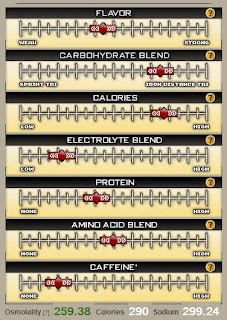 I'll still use some Gatorade Endurance, but not much. I'll use one gel on the bike, at the end, to start the transition to my run nutrition which will be all gels, Gatorade and water. The salt tabs are gone. I don't need them unless it's crazy hot. I'll have them with me just in case, but they tend to overload me on sodium and it screws me up. The other change is solid food. I eat Fig Newtons on a lot of my long rides. I like them and they never upset my stomach, so I decided to try eating some solid food early in the ride to see if that helps me later in the workout. It's tough to be fueled only by liquids for half a day.

Here's the bike plan for tomorrow:

Pacing an ironman ride is tough. My power meter makes it much easier, but only if I pay close attention to it and respect the watts. You typically feel good at the beginning of the ride and it's easy to go too hard. Another thing that kills your ride, is having a VI (variable intensity) that's too high. Basically, that means your intensity varies - you're attacking the hills, surging... An even, steady pace is best. An ideal VI for an ironman distance ride is 1.06 or less. Tomorrow my goal is 1.05.

Here is an hour by hour analysis of two of my rides, which kind of illustrates how varying your intensity will catch up with you over time. This first one is from my brick a few weeks ago, which didn't go very well. I was worked over pretty good by the time I got off the bike.

As you can see, my VI continues to rise as my average watts continue to drop over the course of the ride. I wasn't holding my wattage steady. I was hitting the hills too hard and surging, possibly out of corners. Eventually it caught up with me and the end result was pretty ugly.

Below is the analysis of what is probably my best ride over 56 miles ever:

This ride was shorter, and my wattage higher, but I rode more consistently. My VI varies a bit more than I'd like to see but I kept it under control much more than the previous ride. The biggest differences I notice are hours 1 and 3, especially hour 1. It's very important to start out under control and not waste energy too early in the ride. With the IMWI course being pretty hilly, it's going to be tough to keep my VI really steady but that's my goal. I will be focusing very hard on this early in the ride.

Tomorrow, I'm shooting for 205 average watts. Hour 1 is going to be done at 200 watts to get warmed up and try to avoid going out too hard. Then I'll step it up a bit and try to average in the 205-208 range for the next few hours and dial it back a bit toward the end to get ready for the run. I'll be focusing on keeping my power very steady hoping that helps me come off the bike feeling strong so I can have a good run. And hopefully my nutrition plan works and everything goes smooth.
Posted by Mike at 5:59 PM