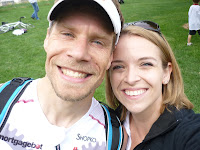 Saturday I raced the Beloit Wellness Biathlon (really a duathlon - 2 mi run, 11 mi bike, 2 mi run).  As I think I explain every year, it's one of my favorite events of the year.  Partly because it's just flat out fun, mostly because it was my first ever multi-sport event 3 years ago.  So this was my fourth time running the event, and it marks the beginning of my fourth year in multi-sports.  I admit, I also like it because it's also my first - and only - multi-sports overall victory - last year.


The day didn't start out as smooth as I'd hoped.  I have a standard warm-up I do for events like this and after I set up transition I set out on my warm-up and my bike wouldn't shift into the big ring.  The course is pretty flat so that's a big problem.


My friends, the ones that know how to work on bikes, like to give me a hard time because I probably shouldn't be working on my own bike.  I have a compact crank I've been unable to sell on ebay, so I thought I might give it a shot and possibly use it for Ironman.  My concern with a compact crank isn't the hills; I know I'll like it there.  My concern is running out of gears on the flats so I thought running it for a flat race might be a good test to see what I think of it on a fast, flat course.


When I installed it I forgot a couple of important things.  First, I forgot to lower my front derailleur which is why I couldn't get in the big ring.  That was an easy enough fix, and not a big deal really.  The other thing was that I apparently forgot some spacers.  I think I needed to take a few of the spacers from my old crank and use them on the new one.  So my crank was sliding side to side a little the whole day.  There was nothing I could do about at that point since I didn't have those parts with me.  Not ideal, but I figured it would get me through the 11 miles and then I can swallow my pride and beg one of my mechanically inclined friends to fix my bike for me....again.


The race started as all duathlons do: fast.  I ran a 6:30 pace on the first run last year so I wanted to go out at a 6:15 pace this year.  I felt like I could have gone faster, but I was concerned about pushing too hard on the first run and blowing up on the second run.  So I checked my pace a little ways into the race - 5:50 - backed off and watched the large majority of the elite wave pass me.  That's not easy to do, but I really wanted to stick to my plan.  I wasn't too concerned (yes, a little concerned) because it was obvious some of them were going out way too hard.  Others weren't really pulling away much.  But there was one guy, Ian Innabary, who was pulling away and looked smooth.  I was concerned about him.  I had no idea if he was a strong cyclist, but he looked fit and I was wondering how much time I can afford to give him.  But not sticking to my plan now could mean giving him a ton of time later on so stuck with my plan.  I finished the first run with an average pace of 6:17 per mile.  I estimate Ian ran about a 5:55 pace.  So when I say I gave him time, I really mean he took it.


The first transition was fast.  I came into T1 in fourth place, right behind second and third.  I passed them in transition and started the bike in 2nd.  I couldn't see Ian and estimated he may have pulled as much as a 40 second gap on me.  It was time to hammer.  He was clearly a better runner, so if I had any chance at winning it was going to happen on the bike. 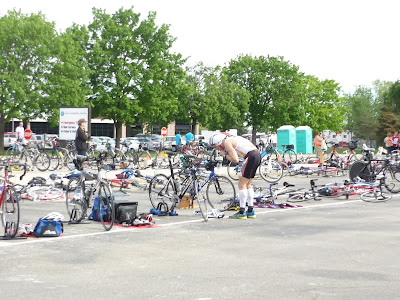 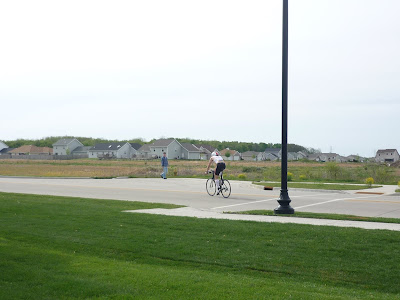 Heading out on the bike.

I haven't had a lot of confidence in my bike fitness lately, so this was a good spot to be in.  It was going to be a good test.  I never got out of the big ring, so shifting wasn't an issue.  I could feel my crank sliding back and fourth, but other than that the bike was good.  I rode super hard, stayed as aero as I could and started reeling him in.  I felt like I made up ground quickly early on so I thought I might be able to catch him a little past the halfway point, and then I would work on a gap.  I wanted at least 15 seconds, in which case I would run as hard as I could and hope he couldn't match his first run pace and not close the gap.  But I really wanted more of a gap.


He was a stronger cyclist than I gave him credit for, and he was really hard to catch.  I eventually did catch him, but it was very late in the bike.  Then I pulled a gap... a good, solid 2 second gap.  It was going to be a tough run.  Even though I didn't get the lead I wanted, I led the race into T2 for the third year in a row so that was fun.  And I averaged 285 watts - 10 more than last year - and 24.6 mph.  I felt like it was a solid ride and it gives me confidence that my bike fitness is improving this year like I need it to. 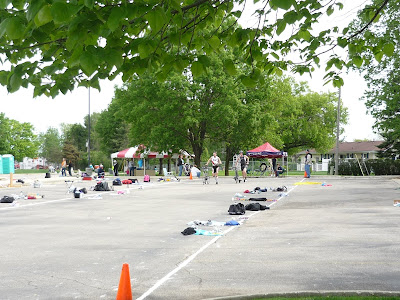 Me and Ian coming into T2. 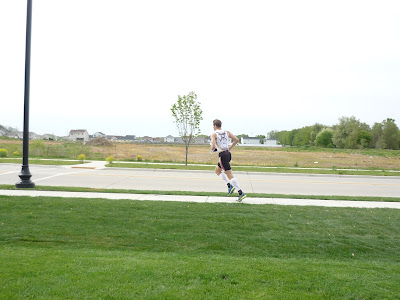 Me heading out on the second run. 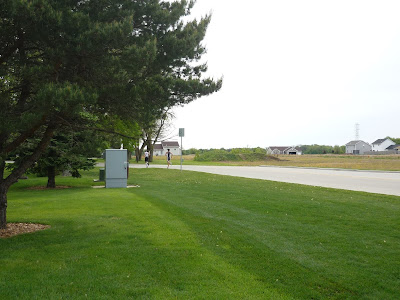 The start of the second run.  Ian wasn't far behind.

T2 was fast, and I held on to my lead heading out on the second run.  I could hear Ian's footsteps behind me so I had no time to settle into a running rhythm.  I had to hammer, and with each step I could feel my calves threatening to cramp.  Being a long course triathlete, I don't really train at this intensity so my calves were rebelling a bit, but they never did cramp and they eventually calmed down.  About a quarter mile into the run, Ian made a pass and pulled a little gap.  Based on the first run, I expected him to pull a big gap but the gap stayed at 4 seconds for a good part of the second run. My goal was to keep it at 4 seconds, and hope for a sprint finish.


About a mile into the run I settled into a running rhythm and picked up the pace a bit....so did Ian and his gap began to open.  I kept pushing and gave it everything I had but I couldn't match his run speed.  I finished 14 seconds behind him and averaged a 6:16 pace on the second run, 45 seconds per mile faster than last year. 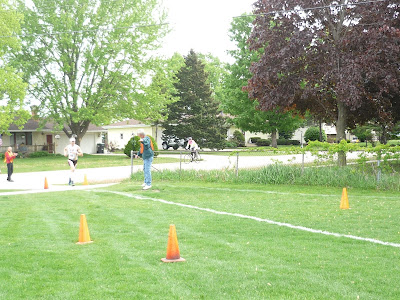 My dad, the volunteer, directing me to the finish line. 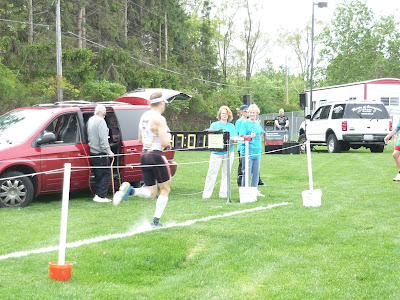 Even though I didn't win, which I really wanted to do, this race was more satisfying than last year where I pulled a two minute gap on the bike and cruised through the second run.  Ian pushed me to my limits, and I had to dig deep.  First place is fun, but it's more satisfying coming across the finish line and realizing you exceeded your expectations and ran a better race than you thought you were capable of. 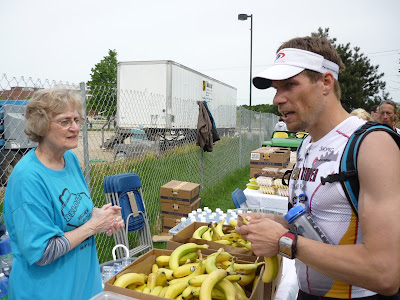 Getting some post-race goodies from my mom who also volunteered.

All in all, it was a great day. The weather was fantastic and I had a ton of fun.  I finished second overall and won my age group. It's tough to complain about that.  And later in the day I took advantage of the great weather and got out for a nice 50 mile run to New Glarus and back, one of my favorite loops.


Even though I've already done some racing this year, Beloit marks the beginning of the race season to me so I'm in full on race mode and loving every minute of it.  Next up is the Aquathon this Thursday.  Then the Lake Mills Triathlon followed by the Liberty Half Ironman, my first 'A' race of the year.


I don't know how this race season is going to go, but if Beloit is any indication it's going to be a very fun season.
Posted by Mike at 6:02 AM

Good post and this enter helped me alot in my college assignement. Thanks you seeking your information.