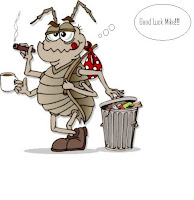 The forecast for the day was great....if you were planning a day on the beach. For an ironman, not so much. I heard on the news today they had record setting temps. The heat index was over 100, but the worst part was the sun. Early forecasts were for cloudy skies, but clouds were few and far between and rarely blocked the sun.

Coming from a nothern climate, I did as much as I could to acclimate to the heat - indoor rides and sauna time. I had plenty of salt tabs with me and planned on dousing myself with water every chance I could to keep my core temperature down. I even decided to dial back my bike pace a bit. I was shooting for between 205 and 210 watts but decided at the last minute to shoot for 200 instead figuring the lower intensity might help me deal with the heat.

My plan was good, and if I had to do it again I would only change a few things. I made some small mistakes, but I don't think I had a bad plan going in. It was just one of those days....

The swim was a beach start and the water was really shallow for quite a ways so you had to run for a while. I was amazed to be more than 5 minutes into the swim before I made contact with another swimmer. 300 competitors and lots of room makes for a contact free swim. I put in a few hard surges to get in with a good group and then settled in and got in a good draft. The swim was a two loop swim, and you have to exit the water to cross timing mats. Right after the timing mats was the first aid station. That may sound weird, an aid station during the swim, but it was great. I grabbed some water and ran back in the water. That may have been my first small mistake of the day. Most people were walking and running spiked my heart rate. I quickly stopped running and walked, but I wish I had not run at all. Lap two was great. I got in a good draft and came out of the water toward the front. I wanted a faster swim, but I wasn't too unhappy with it since running in and out of the water a few times showed swim times down so I feel like I swam well. I just didn't get the time I wanted. That's how it goes.

The first transition went smooth. I had some good help from volunteers and got out of there pretty quickly.

The first half of the bike course was beautiful. Tons of palm trees, lakes, big homes. I loved it. I expected better roads, though. Some of them were brutal, and I dropped the bottle off my frame twice - I have never had that bottle knocked off my bike. I hit some of the nastiest, sharp-edged bumps I've ever hit. And there was no way to avoid them. It was a little frustrating, but I don't think it cost me much time. I stuck with my plan of 200 watts and soaked myself with water in every aid station. I moved my way toward the front and had an average speed of nearly 21 mph.

Overall, the course was fairly hilly. Not as hilly as IMWI, but much hillier than you'd expect for Florida. There were probably 5 or so decent climbs. The second half of the course wasn't as picturesque so it wasn't as enjoyable. Plus, I had worked my way toward the front of the field and had opened up a significant gap over the riders behind me. I couldn't see anyone, and often wondered if I was still on the course. The heat had picked up and I was beginning to notice the heat from the sun. I also began to notice there were no clouds. This was when I started thinking I shouldn't have worn my areo helmet. It has no vents and doesn't allow me to dump water on my head. I should've gone with my regular helmet. The winds had also picked up, and the last 20 miles were into a strong headwind and included several hills. I downed an entire canister of salt tabs on the bike and drank at least two bottles of water per hour. I had a terrible headache for the last hour of the bike and my right leg cramped a bit. When my speed slowed on the climbs I began to notice I was overheating. By the end of the bike, my watts had dropped below 200 and my average speed was 20.4. I'm happy with it, but I was fading.

Here is one of my other mistakes. I won T2. I got in my run gear as quickly as I could and came out of the changing tent like I was trying to qualify for Boston. My parents said everyone before me was in the tent for quite a while and they were amazed how quickly I came out. I should've taken my time, drank some water and cooled down.

I was burning up, and the first aid station was right around the corner from the transition area. I was in 5th place and in a hurry hoping people wouldn't run me down. In retrospect, I should have taken my time. I pushed too hard early on. I didn't realize everyone was going to struggle so much on the run. I had plenty of time.

I stopped at the first few aid stations and filled my hat and shirt with ice. I tightened up my race belt and filled my shirt with so much ice it was bouncing around like a belly. I soaked myself with ice water and drank as much as I could. My core temp was coming down and I was feeling better. My Garmin didn't find satellites until 1.5 miles into the race so I didn't know what my early pace was. When it finally found them, I discovered I was running sub 8 minute miles. Crap. I stepped the pace back quite a bit. I was feeling good by mile 4 thinking I was going to have a decent run.

The second half of the run course loop (you do 3 loops) has no shade and I quickly began to overheat again. I was still in 5th at the end of lap one. I stopped at the aid station by the transition tent and took as much ice as I could. I told my parents the heat was getting to me. They took this picture: 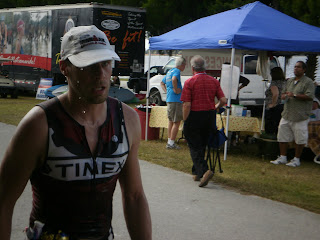 I continued with the ice on lap two but it wasn't as effective as before. By mile 10, I could no longer eat or drink. Anything in my stomach and it knotted up and forced me to buckle over in pain. By mile 13 I was walking...staggering. Everyone who passed me (they were all on lap 1) asked if I was okay. I was no longer sweating and I was shivering. I couldn't walk a straight line and decided I would drop out at the next aid station. For some reason I walked through it. I decided to drop out at the next one, but I kept walking instead. I figured it would be just as easy to finish the lap, turn in my timing chip and have my parents take me home. When I finished the lap, the sun was beginning to go down and it had cooled off quite a bit. My core temp was coming down, but I still couldn't eat or drink. I asked my parents what I should do. They said I should drop out and go to the medical tent. To keep the tradition of never listening to my parents alive, I opted to continue.

Truthfully, I thought about the Wimmers and how they didn't quit even after knowing they wouldn't be official finishers. I was 10:25 into the race, and I thought about all the people suffering through their first lap, some just starting that lap, and how they would probably kill to be in my position. One lap to go with 7 hours to complete it. What sealed the deal was the Wimmers. I thought about how they were hurting and disappointed yet didn't quit. They didn't give up because things didn't go their way so why should I? I respect that, and decided to prove to myself, my family and my friends that I'm not a quitter. I may not always accomplish what I set out to, but I won't quit because of that.

So that was my new goal. One lap. Break 12 hours. The only problem: I can't eat or drink. That would make 16 miles with no food or water.

It was very difficult and my stomach knotted up a few times forcing me to walk. But when I could run, I was running an 8:30-8:50 pace. I skipped the aid stations, not even bothering with the ice anymore. It was getting dark and was cooling down and I just wanted to get this thing over with. 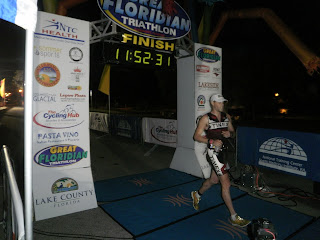 Then, to keep the tradition alive, the med tent: 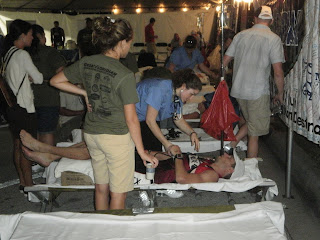 So, all in all, it wasn't the race I was hoping for. I honestly believed I could break 10:30. Had I biked my goal wattage, I would've had a 5:20 bike and I thought I was capable of a 3:45 marathon. But I couldn't handle the heat so I didn't have my best race. But I'm very proud of myself for not quitting. I wanted to, partly because I was hurting and suffering from heat exhaustion but also because I was very disappointed that my race was falling apart. My goal going into this race was top 10 overall. Based on previous year's results, I thought this was possible. I was in position, but couldn't hang on to it.

This morning I checked the results and was shocked, SHOCKED, to learn that I won my age group. I finished 14th overall. 300 people entered the race, 148 finished.

I was hoping to come out of this race with a 10:30 finish and confidence that I could improve that time and qualify for Kona next year at IMWI. I don't have that confidence, but I still have the desire to give it a go. I learned a lot, and feel that my conditioning was there. The conditions didn't go my way, and I didn't adjust enough for them. Today, I feel good. My Achilles is swollen and tight, but my legs feel good. Like I could do a workout today good....but instead I'm going to sit in the hot tub and drink a beer.

Hey Mike. We are all very proud of you! Even though you did not do as well as you hoped, what you accomplished was amazing! And, your results ended up being great! It took a lot of determination to finish the race when you were suffering from heat exhaustion.
See you soon!
Jen, Vic & kids

Way to go Wolfie! You rock and threw down a solid time even with all those issues. And finishing is something to be impressed with! Enjoy the vacation!

That's always appreciating and strong point amongst the racer who will win the race, towards that finish line.. Its a great feeling when someone with whole of its force and strong fit completes it and grabs the position, Congrats on winning... its a very good example of strong supportive health and fitness.