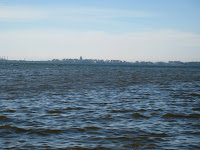 It was also windy, really windy, which made the bike tough...again, the way I like it. 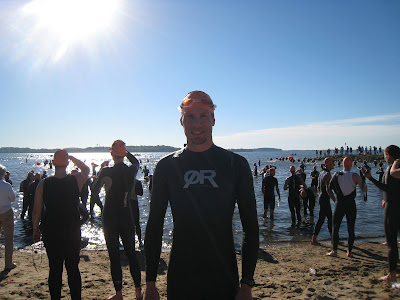 When I put my wetsuit on, I noticed it has 3 more tears in it. I figured the original one was probably from my fingernail when I put it on, but there's no way these are from my fingernails (I don't even have fingernails). I don't know what's going on with that thing and why it's falling apart, but I'm starting to get really frustrated with it. I've worn it less than 10 times. I bought it for the Ironman and now I'm not sure it's going to last that long. It's always something.

I ran into an ex co-worker while I was getting warmed up and waiting for my wave to go. In the background you can see one of the sprint tri waves finishing up. The water was so shallow some of them walked the majority of the swim. 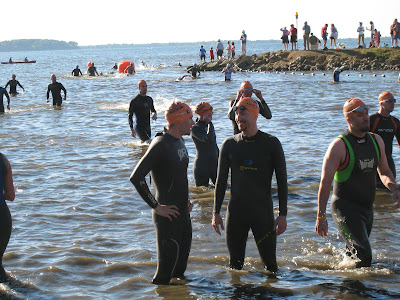 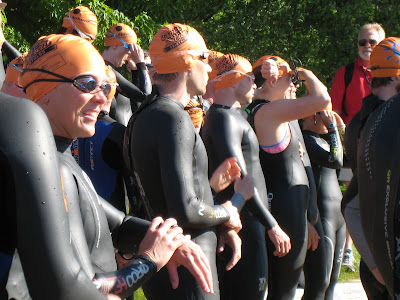 (note to race director: orange swim caps don't work well with orange buoys)
I was pretty nervous for the swim. This was my longest swim (in competition) and I ran into my swim coach before the race. It's not like he expected me to dominate the swim after one lesson, but I didn't want to post a really slow swim time either. 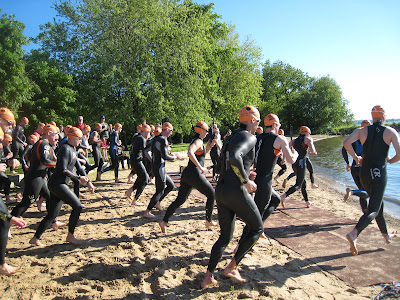 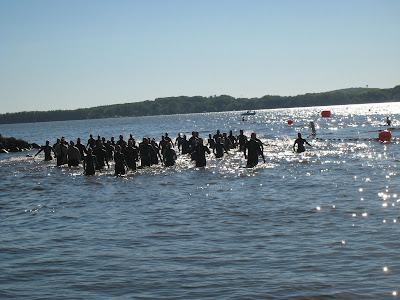 You can't tell from that picture, but the water was really choppy. It was fine on the way out to the first buoy, but after that it was rough and choppy and I had a really hard time spotting the buoys. I ended up way off course a few times, and it wouldn't surprise me if I swam 2000 meters. But I felt pretty good, and I even incorporated some of the changes Mark made in my swimming stroke about 50% of the time. Not too bad. 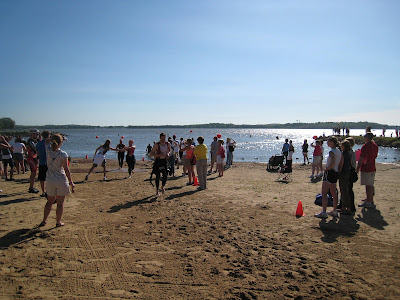 I tried trapping my goggles and swim cap in the sleeve of my wetsuit again, and like last week they fell out. I wasn't lucky enough to find them this week, so Cheri and I headed to Endurance House after the race to pick up another pair - by the way, I've been really impressed with Endurance House lately. Those guys are great.

The choppy water made me a little dizzy. Not real bad, but enough that I had to hang on to my bike while I put my shoes on. 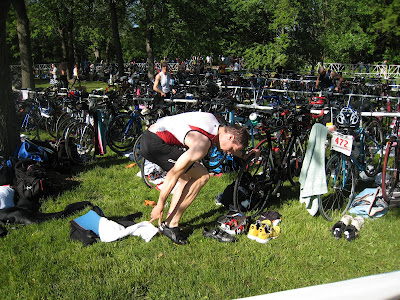 The Bike: The bike went well. It was really windy - mainly a cross wind - and kind of hilly. It was a pretty tough course, mainly due to the wind. I tried to keep my power a little on the low side so I would have plenty left for the run. In retrospect, I probably should have hammered the bike and gone all out. I don't think it would have mattered much. 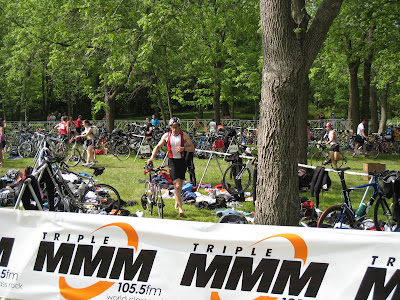 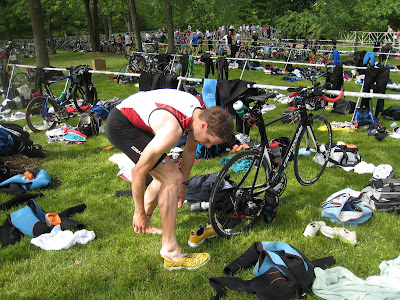 The Run: What a horrible run course. It was a trail run, and the worst kind. Hilly and boring. Most of it was in an open field and there were a ton of switchbacks. If you're going to make us run trails, at least give us something interesting. Running in an open field sucks.

And the hills were a killer. I don't think I've ever suffered this much on a run. I didn't want to do it, but I had to walk through the second aid station. I had a terrible side ache and I needed to get my heartrate down (I talked to the guy who posted the 5th fastest run time and he had to walk too...wow, tough course).

I didn't think the run would ever end. The course was terrible, confusing, muddy, and they didn't mark the miles. You never knew where you were, where you needed to go or how much distance you had left. And with no mile markers, I had no idea what my pace was, not that it mattered that much. The hills took their toll and I don't think I could've picked up my pace if I wanted to. 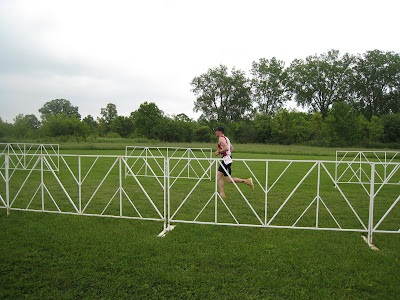 I was really surprised I did as well as I did in the standings. I felt like I was out on the run forever. It was never ending, and I didn't enjoy any aspect of it, which was really disappointing because I typically enjoy running. But trail running isn't my thing, and now I have to wash my Zoots... again. And I got a few nasty blisters so my feet were hurting for the last 3 miles or so.

After finding out I had an award coming, we decided to wait for the awards ceremony that never came. We waited....and waited...and waited...and they finally announced they would have to mail the awards because they couldn't figure out the results. Come on. I'm willing to cut them a little slack since this was their first year, but I expected more being a USAT sanctioned events. You can screw up a few things, but you can't screw up the results. And with chip timing I would think you could get the final results posted in a reasonable time. 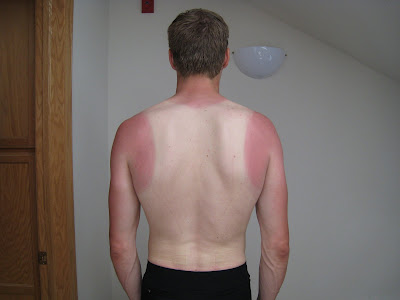 (note to self: take sunblock next week)

Nice race! I hate when its so frustrating during the race, but at least you know what you can change the next time you do it! Congrats...keep up the good work!

Sounds like you had a good race even with the other stuff that was going on. I hate trail running so I knew this event was not for me. That sucks about your wetsuit too. I always heard good things about QR stuff too. Maybe you're just going so fast the molecules of the suit are breaking down!!