I used to run quite a bit when I was younger. I didn't know what a tempo run was, or intervals, or even the distance of a marathon or half marathon...although I did know I would never run either because those are for "real" runners.

What I did know was that it was 1.1 miles around my parents subdivision and 5 laps seemed like a good distance to run. I ran about 5 days a week, not because I thought I needed 2 recovery days but because I never felt like running all 7. I never wore a watch, although I did check the clock from time to time to see how long it took, usually about 45 minutes. I never figured out what pace that was, although I suspected it was horribly slow. I didn't consider myself a runner. I was just a kid with a pair of running shoes from Kohls (which would be replaced years later when the stitching began to give way because I figured that's how you knew your running shoes had reached their limit) who liked how he felt after a good run, especially after running at night. I loved running at night, still do.

Now my running is dominated by my Garmin, pace zones, heart rate zones, tempo runs, striders, training logs... you name it. I replace my shoes after about 400 miles. And even though I ran my 3rd half marathon today, a distance I thought I would never be able to run, I still don't consider myself a runner. And sometimes I wish I could get over my obsession with tracking everything and just strap on running shoes and run, not because I need to get some miles in, but because I like the way I feel after a good run.

Today was the Madison Half Marathon, my 3rd, Cheri's first. And I made 2 mistakes, one of which I make every single time and it's the reason I've been thinking about how I sometimes miss the old days of running simply for the sake of running.

Mistake number 1 was thinking 30 minutes would be enough time to go to the bathroom and get to the starting line. They didn't have half the number of porta crappers they needed, and Cheri and I were still in line when they sounded the horn and sent the runners. We started about 7 minutes late, which meant we'd have a lot of runners to pass.

I ran like an asshole for about 9 miles, forcing my way through groups of runners, bumping elbows, running on the grass or sidewalk. I felt bad being so aggressive, but I didn't want to let missing the start ruin my race. I wasted a lot of energy searching for gaps to run through, and since I was running a different pace than everyone else I never had a chance to get any water at the water stations.

Mistake number 2...I do this every time...I forgot to turn off the auto-pause on my watch. I really wanted to run 7 minute miles, and thought that I might have an outside shot at cracking 1:30. I wore a 1:30 pace band so I could see how far off pace I was because I wanted to start out somewhat on the conservative side (if you consider 7 minute miles conservative, that is). I wanted to be about 60-80 seconds off a 1:30 pace at mile 10, and then try to run a hard 5K. I hit the 10 mile mark exactly 80 seconds off pace (or so I thought) and then dropped the hammer. I was running a 6:59 average at the time and I needed to drop that down to close to 6:30s to hit my goal. The hammer I dropped wasn't nearly big enough as I was only able to bring my current pace down to 6:45...and that really, really hurt.

It turns out my watch was on auto-pause for about a minute, so my official time was 1:32:13, a 7:03 average pace. Don't get me wrong, I'm really happy with that time. It's a PR by more than 20 minutes. But I'm a little frustrated that I thought I hit one of my goals when I didn't, and I think I would've paced myself differently in the middle had I known my actual pace. Garmins are great, but sometimes I think I should race without it. I've raced 2 5Ks without my Garmin, and both were PRs. Maybe a Timex and paceband is the way to go.

Technology...it's great, but sometimes all it does is make things difficult.

Cheri had a great race. I tried to get her to write a race report, but she said she'd rather nap on the couch. She wanted to run a sub 2:10, with a sub 2:00 being a pie-in-the-sky goal. She, too, had to work her way through a lot of runners (I'm sure she was more polite about it than I was) and came across the line in 2:01:06, a 9:15 pace. That's a killer time for a first half marathon, especially one as hilly as this was. 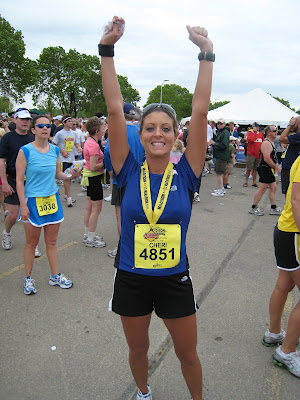 Notice the watch on Cheri's left wrist. That's her new Garmin 405, her b-day present from me. Maybe I should have gotten her a Timex and a paceband instead.

Here's a picture of Cheri with Tim, her boss when she worked in HR. He accidentally ran the half marathon today. He signed up for the quarter marathon, but followed the wrong route (notice...we found him hanging out around the medical tent...he was feeling a little rough). 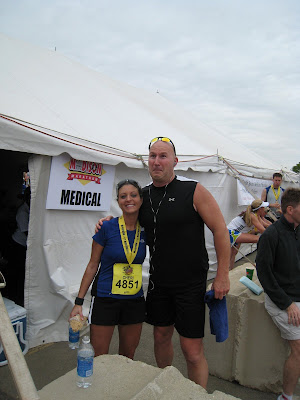 Since we knew some people who ran this race, congratulations go out to the following people for a great race....


We saw this girl on our way to the expo Saturday. Check out the handlebars.... 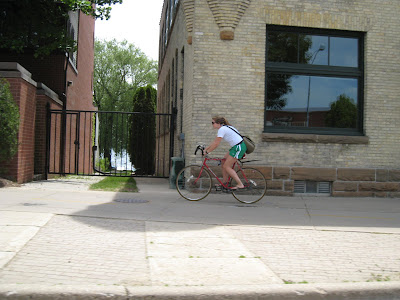 Hey Mike thanks for the shout out. Your crazy fast and don't let anyone tell you different. I never ran as a kid, (I was a decent sprinter in my early kid years but that faded with the increase in pant sizes over the year) and I envy you guys who can run and make yourself suffer.
I suffered today. Poor training and some very bad rookie mistakes. But I finished and I know what it feels like now so when I do IM09 I got some idea what to expect. The hills suck on that course, I agree with you there and yes they need about 50 more porta johns for that many people. It's a bit ridiculous.

That same thing happened to me last year with the portas. This year I just made sure to get good and EMPTY before I left the house!

They really need to plan better now that the fields are growing so much for this event.

You sure as hell sound like a runner to me... Sounds like you had a good day.

I'm a geek as well and will accessorize the hell out of any activity. I'm fighting buying a garmin, partly because the money needs to go into my house right now.

Apparently you bumped into someone else when you passed me this morning. : )

Hey Mike, It was good seeing you in Madison. Congrats on a great race and congrats to Cheri on completing her first half with a great effort. Continued Good Luck with your IM 2008 training. Thats a bigger undertaking than I could ever imagine taking on.