Shower with your shoes on. 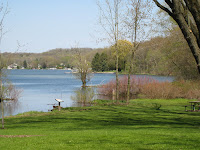 Today, the weather was great. Too bad yesterday wasn't like this. I woke up early and went out for a 10 mile run on the bike path. It was really nice... a little chilly but there wasn't a cloud in the sky, no wind, the birds were chirping...a great spring morning.

My run went really well. I started out at a comfortably fast pace and picked it up toward the end and finished fairly hard. I didn't realize how much of a hurtin the duathlon put on me until after my run. A 10 mile run will make my legs sore, but not that bad...usually. It only took about 2 hours for the pain to set in. So what did I do?

I went for a bike ride with Cheri. We headed out to Whitewater lake again. Many times a ride will loosen up my legs and they'll feel better but not today. They were really hurtin after the ride. Good thing this is a recovery week. I need a break. 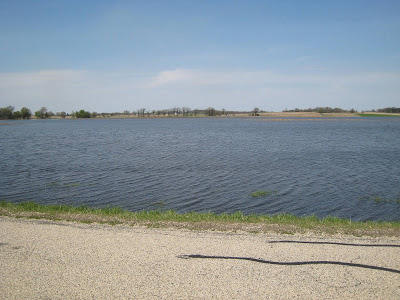 That's what record snowfall will do for you.

I've been wanting to work on the fit of my tri bike so I had Cheri take some pictures of me while I rode the trainer. Here's one of them.... 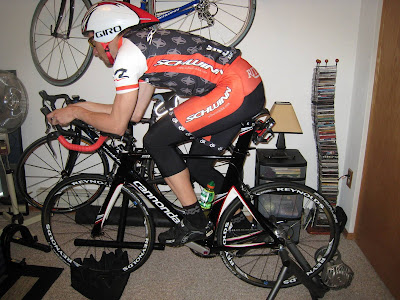 It's not too bad, but I've got some work to do. You can't really tell from this picture, but it looks like my saddle is a tad high and I think that may be why my power has been a little low on this bike vs my road bike. And it looks like I could drop the front end a bit and get a little more aero. I also need to angle the aerobars down a little, I think. You can see my wrist is at a goofy angle and that's why I'm getting pain in my wrists.

After that, I plugged my measurements into the fit calculator at www.competitivecyclist.com. The numbers that came up with agreed that I need to lower my saddle, and it says I can lower the front quite a bit.

After the duathlon yesterday, I put my shoes back on and hopped in the shower. They clean up pretty nice. You can't even tell I ran in the mud. 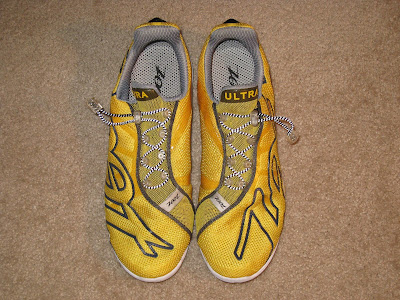 I'm kidding. I didn't actually shower with my shoes on, but I did give it some serious thought.

These are the wheels that came with my bike. I really want to throw them on and go for a ride to see what they're like, but I'm not going to . I've decided to sell them, and it's better selling a set of wheels that have never been ridden than trying to convince someone they only have 20 miles on them. Plus, if I don't ride them I won't know what I'm missing...if anything. I doubt I would prefer them over my Reynolds wheels. 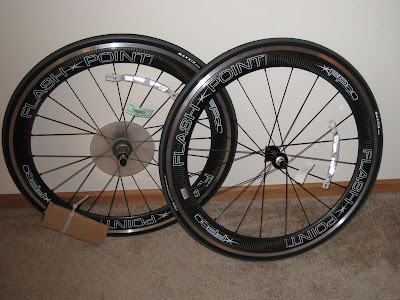 How much are you selling the wheelset for?