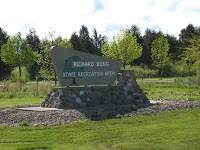 It turns out the park is named after Richard Bong. I have no idea who that is, but at least the name makes sense to me now.

The race was a two hitter, if you will. Two laps around the park. Registration is at Brighton School, and the race starts down the road a little ways and is one big rectangle with 3 right turns. It's pretty flat and the roads are really nice with little traffic. It's a great TT route. Here's a picture from my warm up ride... 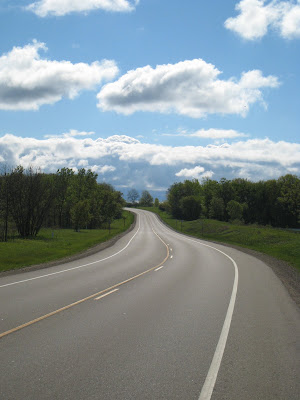 Don't be fooled. It wasn't that nice out. It was cold and really windy. It wasn't too bad when the sun was out, but clouds rolled in and we didn't see the sun too much once the racing started.

One thing about TTs: those guys are FAST. And serious. Lots of skinsuits, aero helmets, disc wheels... 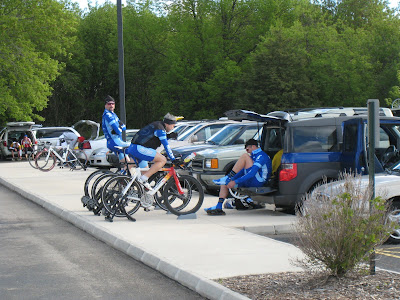 I knew I could make myself suffer, but breaking an hour was a long shot. But it's like the 4 hour marathon, everyone wants to do a 40K TT in under an hour so I figured I might as well go for it. Since I knew it was a long shot, I wasn't going to be disappointed if I didn't make it.

I figured I could average around 275 watts, so I tried to hold back a bit in the beginning and pace myself. It's easy to ride well above threshold in the beginning, but you'll pay the price big time later on. The race started and ended with a tailwind, so you got a chance to start out with some decent speed.

Eight minutes into the ride, I looked down and I was averaging 26.5 mph and the guy who started one minute behind me passed me like I was tied to a pole. I told you those guys are fast. My average speed dropped as I turned into the wind. I watched my power closely the whole time and, after the first few miles, tried to make sure I kept it at 280 or higher. It was tough, but I finished the first lap in about 30 minutes with an average power of 279.

My goal was to suffer, and suffer I did. The second lap was painful. I was tired, the wind was brutal and I was really struggling to keep my power up. I told myself I would make the last few miles really, really hurt. I wanted to finish with nothing left.

I stepped it up a bit the last few miles and I was able to keep my power around 300, and it became a total sufferfest. My legs were aching, and I kept telling myself to 'make it hurt.'

Even with stepping it up a bit, I finished with an average power of 275 so my power dropped a bit on the second lap. And I didn't break an hour, but I came close so I'm really happy with my ride. Not satisfied, but happy (my high school football coach once told me it's okay to be happy with your performance, but never satisfied - or you're done improving - and it stuck with me). It was tough and I gave it everything I had and that's all you can do.

I haven't seen the final results yet so I don't know how I did in my category. Mid pack is my guess.

I was supposed to run tonight, but my legs are really sore and I don't think it's a good idea so I'm going to rest up. Only one week until the Madison Half Marathon.
Posted by Mike at 2:25 PM

Dude, good job on the 40k! nothing says suffer like a good ole time trial.
btw, Richard Bong, WW2 figheter ace from WI 27 kills, known as the "Ace of Aces".

Thanks, man. I've decided to take you up on the carpooling offer to the State TT Championships in 2 weeks. Looks like we'll both get to do some serious suffering. Good times.