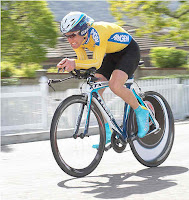 Levi's ride at the Solvang TT was inspiring. Check out the look of determination on his face. He was focused and he showed that killer instinct I thought he lacked a little last year. You could tell he really wanted that win. Hopefully, they'll let Team Astana back in the Tour and Levi can ride this momentum to a Tour victory.

Yesterday, was the 3rd indoor TT at SBR. I've been putting in a lot of time on the trainer the past 5 weeks, but I haven't tested myself at all so I didn't feel like I gained much fitness. I knew my endurance had gotten better, but it didn't feel like my power had increased. In fact, I've felt like I've been in a bit of a rut lately, just going through the motions without making gains.

I did the first TT in 16:36 and the second in 16:20 so I was really hoping to break the 16 minute mark yesterday. If I couldn't crack 16 minutes, I figured if I could come close then maybe I could beat that mark in the final TT in 2 weeks.

I showed up pretty early and got in a really good warm up. Then I hopped off my trainer for about 5 - 10 minutes while the first heat finished up so I could cool down a bit. SBR isn't very big so it can get pretty hot when you have a group of cyclists on trainers. When they got my group set up on the computrainers, they entered my weight wrong in the system. They didn't get all of my previous weight deleted so I was in the system at just over 2000 lbs. Once the heat started, I was barely working and doing more than 30 mph. Then the trainer added a ton of pressure and I came to a dead stop. They stopped the TT, figured out the problem and got us ready for another go. It didn't really affect me, but the guy next to me didn't realize they stopped the race right away so he put in a good 2 or 3 minutes of work before stopping. After the race, he told me he thinks that may have affected him a bit because he didn't beat his previous time. That sucks that his race was affected by a false start, but he still rode very well and won the heat with a time of 15:31.

I tried to keep my power really steady and my cadence higher than last time. I was at 85 in the second TT and I wanted a cadence of closer to 90 on this one to see how that might affect my ride and fatigue level. I think the higher cadence worked because I never felt a serious burn or fatigue in my legs. It turned out to be a good ride for me and I finished in 15:39, 40 seconds better than the last race. I'm happy with that time, but I'll need to repeat it before I believe it. That's a pretty big increase and I'm not convinced the trainer was calibrated correctly. Typically, my powertap shows my average watts and average speed a little higher than the computrainer. This time, the average speed was higher, but the watts was lower. I think my time may be correct, but I think the computrainer was giving me the wrong wattage info (I'm hoping anyway because I'm quite happy with that time). The computrainer had me finish with an average of 327, up from 292 last time. There is no way I made that big of an increase. My powertap showed 310, up from 295 so that's believable. There's another one in 2 weeks so I'll have to try and repeat this performance and then I'll know the time was correct.

After the TT, Cheri and I went for a run on the bike path. It's still covered in snow and ice, but it was 30 degrees and sunny so it was a nice day to run (yeah, that's how freaking cold it's been this winter). The birds were chirping and people were walking dogs. It almost felt like spring....almost. We did 4.5 miles and Cheri ran really well. Overall, her average pace was faster than last time and we ran further this time. It looks like her base training is paying off. Once spring comes and she steps up her training, I think she's going to make some good gains and have a good year.

Here's a picture of one of the Team Jelly Belly riders from the Solvang TT: 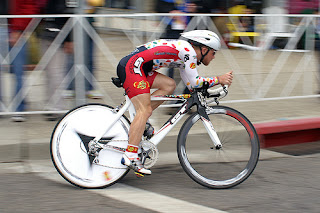