Saturday was the Furry Friends 5K.  Unfortunately, Friday night was our first snowfall of the winter.  We got about 4-6 inches overnight and it was still snowing in the morning.  I don't own Yaktracks or have a pair of shoes with screws in the soles.  I run in racing flats all the time so I could either go with my racing flats or my other racing flats or my Zoots, which are also racing flats or I could take my cross country spikes.  Hmmmm....

In the end, I opted not to take my spikes.  I've run in the snow a lot and never had problems so I figured spikes would be overkill.  It was only a couple of inches of snow.

The race began at the Baraboo Civic Center, and Courtney and I nearly fell several times trying to walk across the parking lot.  It was a lot slipperier than I expected.  I was regretting not bringing my spikes.  We picked up our packets and then we headed out for a short warm up, mainly to see how slippery it was. 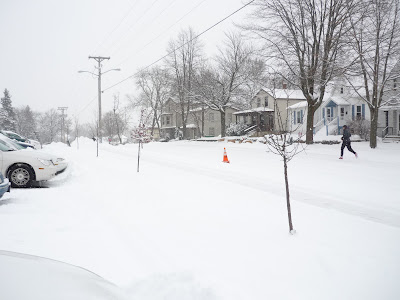 Warming up.
It wasn't as bad as the parking lot, but still very slippery.  No PRs today.  My only real goal for the race was to not slip and tear a tendon.  Courtney has been working on forefoot running (and doing quite well) so I reminded her that this would be a good opportunity to focus on that because heel striking on slippery roads could be disastrous.
There was a pretty small group, and everyone seemed to be looking forward to a potentially adventurous race.  We went out at a 6:45 pace, which was probably a little too fast for the conditions.  As we came to the first turn, a girl next to me lost her footing and went down.  The corner was very slick and we basically had to walk it.  Then we came to the first intersection and, unfortunately, a puddle.  So much for dry feet.
I was in 4th place, and could see the leader still so I wasn't too far back.  I did my best to close the gap on 2nd and 3rd, who were running side by side and about halfway between me and the leader, but I just couldn't get moving.  I was holding a 6:40 pace and my feet slipped everytime I tried to go faster.  I was having fun, but it was a little frustrating not getting the footing I needed.  The conditions were constantly changing.  Some roads were plowed, some not.  There was snow, ice, slush but no dry pavement.
In the end, I finished in 4th with a time of 20:53.  The winner ran a 19:40.  How often is the winning time at a 5K barely under 20 minutes?  The conditions were tricky, but it was really fun.  I felt like a kid on a snow day.  The town was dead so we ran wherever we wanted, which meant right down the middle of Main Street.  It felt like we had the whole town to ourselves.
I actually really enjoy running in the winter as long as the temps aren't too cold.  It's so quiet and sometimes all you can hear is the snow crunching under your feet.  This was one of those days. 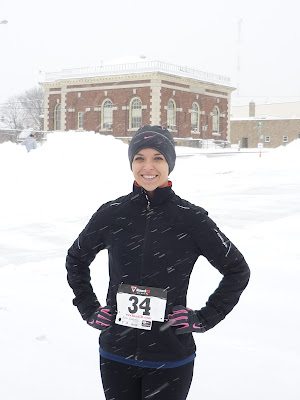 Courtney Pre-Race
Courtney had a good race.  She didn't slip as much as me (she's smart enough to buy shoes with tread), but struggled more with course markings as a lot of people around her were taking wrong turns (the winner took two wrong turns as well).  I don't remember her time, but it was good enough for 3rd in her division.
Post race was homemade cookies and hot chocolate while we waited for the age group awards.
Posted by Mike at 6:00 AM