I was nervous about today's workout for a few reasons:

1. It was going to be my longest workout ever (not counting the IM last year)
2. I made a lot of changes to my bike set up and nutrition plan
3. My last long brick didn't go very well
4. This was my last long brick before the race so I don't have any more chances to test and/or change my strategy.

The changes to my bike set up weren't that drastic, but any time you change things there's potential for problems. I love the rear bottle cages Matt designed, but I don't really like rear bottle cages in general. Plus, due to the design of my bike those cages sit kind of high and it's tough for me to get on and off my bike quickly. Plus, I only want two bottles on my bike (I can only mount one cage on my frame). So I mounted a bottle cage between my areobars. 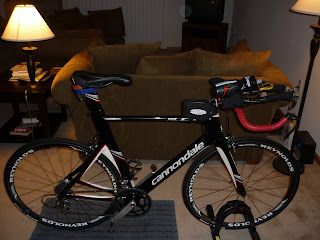 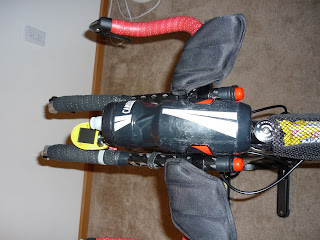 I loved this set up. It was great having the bottle up front. It's really easy to get a drink from and there's no more wondering if you've dropped a bottle. The bento box was new (well, kind of) and worked out, but it rubs my knees sometimes and drives me crazy, but I liked having Fig Newtons to eat and may eat two packages of them on race day. Solid food worked great today. So I'll stick with the bento box unless I figure out a way to carry Fig Newtons on my bike without it.

As for the workout, it was really tough but I survived it. There was good and bad, and one thing that I swear could only happen to me. Unreal.

I swam at the Y and started at 7:30 (that's what time the Great Floridian starts). I swam the first 4 laps hard to simulate the stress of a mass start and swimming too hard early in the swim jockeying for position. Then I settled into IM pace and tried to focus on form and staying relaxed. It was going to be a long day. I wanted a 1:40 per 100 pace or better, and every time I checked my splits they were between 1:36 and 1:40 so I hit my goal. Good swim.

Like any good triathlete, I ran out of the pool and into the locker room at full speed. I elbowed the old men, pushed them out of my way and changed as quickly as I could. I put my pants on over my wet swimsuit...no time to take it off. TRANSITIONS COUNT!

I'm kidding. After my swim I drove home and got in my tri gear. I figured it would take about 30 minutes to get home and get on the bike, so nutrition-wise I would be starting the bike roughly the same time I'd be coming out of the water if I swam a full 2.4 miles. I was on the bike by 8:30 so it was pretty close.

The VI for hour 6 isn't really accurate. Coming through my neighborhood and coasting up to my apartment building screws up the VI a little. If I cut out the last minute of hour 6, the VI is 1.05.

My focus was riding steady and being conservative in the beginning. I felt like I was being too conservative early on and riding slow, but I did hit all my goals so it worked out. It was a good strategy, but it's really hard to hold back the first two hours when you feel really good and want to hammer the hills and get your average speed as high as possible. On lap two I still felt really good so I pushed a little harder and pushed a little harder on the hills.

Hour 3 had my highest VI, but that also included the three hills after Cross Plains so I expected it to be higher than the other hours. Hour 6 included those as well.

My nutrition worked out great, and Infinit was much better than Perpeteum. The only problem, I think, is that I didn't go with enough electrolytes. Luckily, I bought a small bag so I'll adjust that and reorder before the race. I didn't think I'd need so much sodium, but it got to me at the end (ugly).

THIS COULD ONLY HAPPEN TO ME: Two hours and fifteen minutes into the ride, I got stung by a bee. Two weeks ago I got stung on the palm of my hand while riding and that hurt. Today...well...I got stung in the balls. Right through my tri shorts. Sweet Jesus that hurt.

Being a slave to my power meter, and having a great ride going, I swatted him away and got right back at it and tried to block out the pain. Not easy. That's worth repeating: Not easy. Eventually the pain went away...eventually. That was some serious mental training. Next time I will forget all about the power data and lay down by the side of the road and cry for a while, which is what I should've done today.

That means be strong. That's what the run was all about. Go out easy, settle into goal pace and hopefully hold it the whole time. Kia Kaha.

I kind of pulled that off, but I fell apart at the end because I didn't replace my electrolytes. Three miles to go, I got nauseous, lightheaded and dizzy. What really frustrates me is that I knew it was an electrolyte imbalance and I had salt pills with me but I was too tired to screw with them. I thought I could hold my pace and make it home and then deal with it. I hadn't had anything to eat or drink in a few miles so I was on the edge. It was a stupid move. I should've stayed on top of that. I never would've made it another 13.1 miles today. I had an 8:32 average going until then. I finished with an 8:36 so it wasn't all bad, but it was a struggle. Here are my splits: 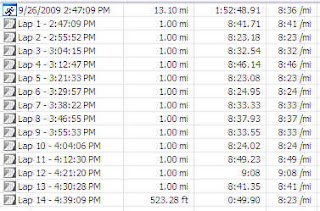 The 9:08 came from standing on the side of Cross Country Road dry heaving. Once I realized I wasn't going to puke, I decided to just gut it out and get home. One foot in front of the other. Kia Kaha.

I was lightheaded, nauseaus, dizzy and I couldn't catch my breath. I just ran 13 miles, and now suddenly I can't breathe. I took my blood pressure, and it was very low just like it was after the Ironman. I took a salt tab and drank some water and within minutes I felt much better. It was amazing, really. I took my blood pressure again about 10 minutes later and it was close to normal, still a little low but not bad.

Sometimes when I come home from tough workouts I feel like hell for a while and I think it might be low blood pressure due to low sodium levels. So from now on I'm going to add a salt tab to my post workout recovery after long workouts.

Overall, the workout was a success. Some things went really well, others not so well but I've learned from them. I know that Infinit is going to work for me, but I need to tweak the formula a bit. I also know that Fig Newtons worked great (I felt so much better after I ate some solid food). My new bottle mount worked. My pacing was great, and I ran well until the last few miles. I know what I need to do to fix that, so hopefully I can execute those things on race day.

And I got through my first 8 hour workout....which wasn't easy. I was hurting toward the end. It's not easy to go into a workout that long without much rest.

1. well done on the massive training session, i'm sure it will give you something extra on race day. spending 8 hours training is immense .