Gators and the Silver Lake

The Great Floridian is exactly 2 months away, and I'm starting to get prepared. I'm focused, and the plan is coming together. My parents are driving down there so they can take my bike and other stuff, and I just booked my flight so I don't have to spend 2 days in a car right before an ironman. After the race, I'm going to Disney World and I'm going to lay on the beach and do nothing. I can't wait.

This week I start a tough 3 week training block. 18 hours this week. 20 next week and 22 the following week. By far the most hours I've ever logged in a 3 week period. I'm a little nervous about it because it's going to be very challenging and I can tell from my last 3 week block that it's time for me to focus again on stretching and my strengthening/core work. I've been neglecting that and I'm feeling those aches and pains that turn into injuries when I neglect those things. It sounds easy to stretch for 15 minutes, but when you're working out 20 hours in a week you don't feel like spending 15 minutes stretching when you could be sleeping on the couch. But it needs to be done. I pay the price when I neglect those things.

The joke has been that I'm going to get eaten by an alligator on the swim, until I pointed out that it specifically says on the website that I won't encounter a gator in the water. So Matt sent me a picture his parents took on their bike ride this weekend... 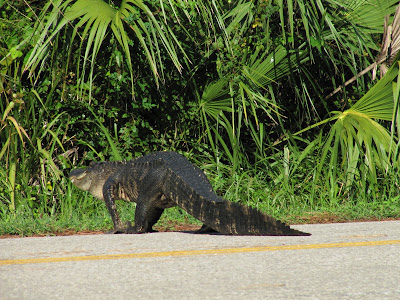 It didn't occur to me until now that I might encounter a gator on the bike. He's 6 feet. I'm 6 feet. It could be a good fight, but a wise man would put his money on the gator.

Saturday was the third annual Silver Lake sprint tri in Portage. I've raced this one every year and it's a lot of fun so I was really looking forward to doing a short, fun race. I took 4th overall, first in my age group, last year so I was hoping for 3rd overall or better.

The Swim - The swim was great. I felt fast in the water and got on some fast feet and got a good draft. I pushed hard and didn't have any problems other than sighting the finish due to the sun. But I made it okay and didn't lose too much time searching for the beach. I got out of the water in 6:36, the 4th fastest swim of the day (big surprise)...most likely due to my new schnazzy white goggles. They're PRO. [last year I was out of the water in 5:50, but the swim was shorter last year]

The Bike - I've been feeling good on the bike this year so I wanted to push really hard. I averaged 24.2 mph last year and was hoping to break 25 this year. I thought I could do it with a 300+ watt average, but I could tell early on that I didn't have the legs to hold 300 watts. I backed off to 280 and held that (compared to 265 last year). Unfortunately, this year we had a slight crosswind and that slowed the bike portion down a bit. I put out more watts, but only improved my time by 2 seconds over last year and still finished with a 24.2 mph average - but it was the 3rd fastest bike split so I'm happy with that.

If you've noticed, my transitions were a total of 2 seconds slower than last year, and my bike was 2 seconds faster so other than the swim I'm dead even with last year. And it's hard to compare the swim from year to year because I don't think the buoys are ever in the exact same spot.

The Run - I've been working on my running a lot and hoped to run really well. I could tell immediately into the run that I wasn't used to short, intense workouts. My side ached and my calves were cramping up. Shortly into the run, Tim Petrie (the eventual winner - for the third year in a row - he has a great streak going) passed me and pulled away quickly. About a half mile into the run my legs loosened up and my side ache went away and I was able to pick up the pace. From that point on, I felt pretty good, but not fast. I haven't been working on my 5K speed this year, but I was hoping it had improved along with my improved long distance speed/endurance. Nope. I ran the exact same time as last year. 20:16. I'm happy with it, but I really wanted to go sub 20.

I finished in 1:08:00 for third overall and first in my age group. I improved upon last year and had a lot of fun so I'm really happy with the race. As usual, the organizers did an awesome job. What a great event.

Even though this was a short race, and I'm training for an ironman I'm really glad I did this race. It was a good break from my long workouts, and I think the intensity was good. But mostly, it was lots of fun and now I feel more focused on my ironman than before. If I go too long without racing, I lose a little focus so this was really good for me.

Now I just need to focus on nailing this 3 week training block and figuring out how I'm going to fend off a gator in the middle of a 112 mile bike ride.
Posted by Mike at 7:32 PM