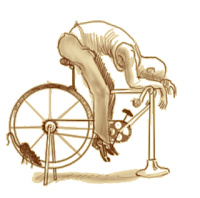 Friday I decided to take the afternoon off work and enjoy the weather with a long ride. Having already done a 75 mile ride this year, I figured I'd map out something in that range. Winds were supposed to be from the West, so I decided to head west and enjoy a tailwind on the second half of my ride when fatigue will be sure to set in. I love riding west of town so it seemed like a great plan. Tailwind on the way home...great route.. nice weather...perfect day...right?

Forgotten detail: My 75 miler (a month ago) was intentionally flat. I wanted to do some distance and save the hills for later when I'm in shape. So I rode East.

I grabbed my book of Bombay Bicycle Club routes and found one that was about 65 miles. It started at Elver Park and went out toward Blue Mounds and back. I figured if I left from work, did the route and returned to work I should have about 70 miles. And I love riding around Blue Mounds. Perfect.

I set out a little after noon with the lunch ride and was wishing I had gone with a different plan. Everyone came out for the ride so there was a big group and I wanted to ride with them. But I had a route programmed in my gps and a pocketful of Fig Newtons so I stuck with the game plan and kept going straight when the group turned off Raymond Road onto Tawhee. It's rare that I ride with my ipod, but today was one of those days so I turned on my music, enjoyed the warm air and started noticing my legs felt sluggish. Not good.

Forgotten detail: I have never ridden around Blue Mounds this early in the year.

The first half of the ride was into the wind so it was a little slow, but fun. I ran into Mike from Crono Metro and rode with him until Black Earth where his route sent him back to Madison and mine continued on to Blue Mounds.

The climb was brutal and I was quickly reminded that I do not have my climbing legs yet. I was struggling. The only thing I had going for me at this point was that one of my favorite songs came on my ipod and I hit the back button when it was over so I had a chance to listen to it a couple of times (it's a 5 minute song).

With Mounds Park Road out of the way, I got to enjoy a very long downhill where I was able to "cruise" at 32 mph for several miles. Very fun.

Forgotten detail: The climb from Midtown to Raymond Road is an 18% grade.

On the way back I realized I routed myself back on Midtown which meant I would have to climb that short, horribly steep hill up to Raymond Road. I was spent, and it was very, very tough.

When I got back to work I grabbed my recovery drink from the fridge and heard, "You look exhausted."

One last forgotten detail: Water. I ran out at mile 45.

Yesterday I waited for the rain to stop so I could get my long run in. Around 4 o'clock, the rain let up so I headed out....just in time for it to turn to snow. It snowed the whole time, so I ran in slush for 90 minutes. My feet were soaked and my legs were tired by mile one - still fatigued from Friday's ride. And the wind was brutal and cold. I ran 20 seconds per mile slower than last week. It was one of my worst long runs ever.

Today, my legs ache. I'm tired and sore and I have to swim tonight.

This weekend SBR is having a team time trial. Each rider rides for an hour. I tried to put a team together, but it fell through so I figured I'd hope for good weather and plan for a long ride. Then Jess at SBR told me one of the guys who does the indoor TTs was trying to put a team together and asked if I was planning on doing the TT. I said I would do it so now I've got an hour at threshold to look forward to...indoors...and the weather is looking pretty good.

But it should be a good test of my fitness.