If you don't make your booty move.... 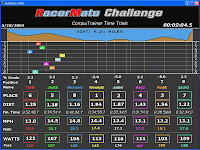 Indoor TT #1 didn't go very well for me - for various reasons - so I was determined to make this one better. I had only one goal - suffer. I didn't care what place I came in. I wanted to stay focused for the whole race and get my average watts back where I think it should be.

Last time I believe I averaged a little less than 250 watts. This time I finished with an average of 297 (from my Powertap, not SBR's computrainer). I averaged 315 in my best TT last winter so I still have a lot of work to do this year but I finally feel like I'm on track. My focus is back. My motivation is back. My holiday weight is disappearing.

It's amazing how quickly fitness disappears. Last spring at the Double Bong TT I held 280 watts for an hour...and improved my endurance throughout the summer. Now I can barely top that number for 16 minutes. I realize it's important to take a break and recovery both mentally and physically, but it's frustrating to see your fitness disappear.

After the TT, I met Dennis in the arb for some snowshoeing. We looked for the lost city, but it is in fact lost. No sign of it. We figure that's probably because of the snow, so maybe I'll find some remnants of it this summer if I do some trail running in the arb. It could also be because we stuck to the trails and didn't venture off into the Lost City Forest...maybe there are some signs of it out there. 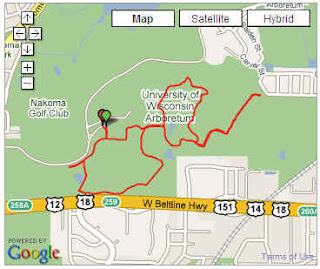 4 miles
The Lost City was a planned subdivision back in the 1920s. They started it, but didn't get very far for two reasons: the Great Depression and the soil. Basically, it sunk. It's funny how nealy 100 years later it's fun to search for "The Lost City" when in fact it's really nothing more than a bad idea that probably cost some dumbasses their jobs. Big mistakes tend to lead to interesting historical trivia.

As an ex-Teamster I feel it's my obligation to head back there this summer and see if Hoffa is buried there. You never know.
*******
I didn't feel like spending a lot of time creating a fancy schmancy spreadsheet for my Great Floridian training, so I joined TrainingPeaks.com. I've been using the software for a year now, but I haven't had the online subscription. Online, you can create and track your training plan. The software just allows you to upload and analyze workouts.

The online version is awesome and I wish I had joined last year. I can create my yearly and weekly workout schedule easily and access it anywhere, which is nice because I tend to forget what my lunch workout is supposed to be. I e-mailed it to myself a lot last year, but now I can just log on and see exactly what I'm supposed to do. Here's a shot of the weekly planner for this week. I'm doing 3 weeks of prep before my actual training program begins and I believe this was week 2:

I wanted to post my whole training plan, but the whole thing doesn't fit on one screen and I don't know how to use Hypersnap well enough to get a snapshot of the whole plan. So here's the first few weeks....

This is very similar to the plan I used for IM Wisconsin, except I created it all in a spreadsheet and it took a lot of time. I know it looks involved and confusing, but it's really not that bad...especially when you do it on TrainingPeaks.com. Basically, I'm just following Joel Friel's book and creating my own workouts. The x's on the right side of the page designate the types of workouts I'm supposed to do during the week (speed, muscualar endurance, testing....). I mostly ignore those and do whatever I want. This year I'm going to try to follow the plan a little closer but I suspect that won't really happen. So it goes.

Here's part of my training plan from my IM spreadsheet... 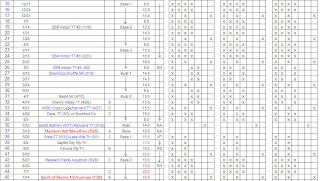 I know.... crazy.
*******
I'm not the biggest Lance fan you'll ever meet, but for some reason I'm very interested to see how his comeback goes. Here's a good Lance video...