I'm not a big fan of cows - although I do love a good burger - but I thought it was appropriate since they call Ironman Wisconsin Ironmoo. The funny thing is that you probably won't see any cows if you come race IMMoo. There's only one farm I can think of on the route that has cows, and I didn't see them during the race. I did, however, see Satan on one of the hills. Maybe they should call it IronHell.

My parents have offered to have my finisher's medal engraved (thanks) with whatever I want on the back. I'm thinking of putting my time on there, and if you have any suggestions for something else let me know. I can't think of anything.

Now that the race is over, I'm going to focus on improving my running. I want to become a better runner, so that will be my main goal for the winter. I need to get stronger on the bike too, but I think it's my running that needs the most work. In a few weeks, I'll start training for my first 10K, the Berbee Derby. I'm looking forward to ramping up my mileage again and focusing on speedwork.

Next year I think my big race will be the Spirit of Racine Half Ironman. I feel like that race got the best of me because I didn't do very well with my nutrition and hydration so I want to go back and see what I can do. I'm also looking forward to doing more sprint and olympic tris next year as well as some time trials and maybe some bike races. Maybe I'll do one of the accenture tris. Those look fun. Maybe the Janesville triathlon will make a comeback. That was my first tri, and I swallowed a good part of Kiwanis Pond (or Atlas Pit or whatever they call it now) so I'd love to do that race again.

Then in the fall, Cheri and I are planning a trip to Italy. It's her reward (mine too) for putting up with me and my triathlon obsession.

Then... Ironman Wisconsin 2010. The team is already coming together. Cheri and I know three people she works with - Bob, Marty and Steve - that say they're on board for 2010 and they're all good athletes so she's already calling us the Fantastic Four - or something like that (I hope it wasn't the Fabulous Four) - and claiming there will be t-shirts. Ryan at work said he almost got in line this year, so I suspect he may sign up for 2010. That makes 5. There's a lot of time for things to change, but I may know quite a few people doing the race in 2010. Could be a really fun year.

Bob will be in the 60+ age group and wants to take a shot at qualifying for Kona (it would be Kona 2011). Right now he's fighting an ankle injury so he has his work cut out for him, but I think he's got a really good shot at it. He has a few IMs under his belt and he's tough as nails. The only problem (other than his ankle) is that his age group only gets one, maybe two, Kona slots so he needs to go into the race expecting to win his age group.

To qualify, I would need to plan for a sub 10 hour Ironman. Sub 10! That's crazy fast. That's all I have to say about that. 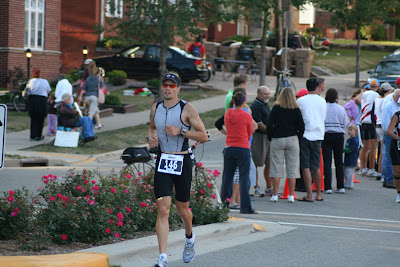 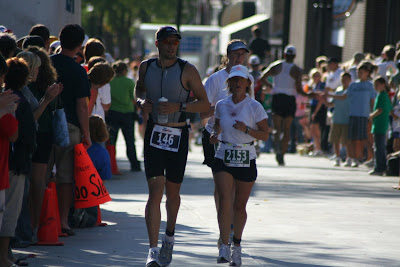 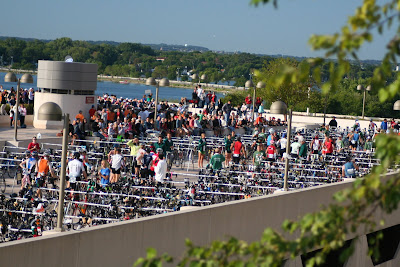 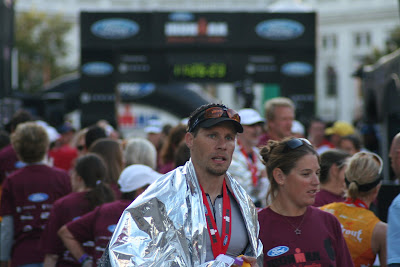 If all goes well in 09, we are on board for 10. Bob has a great shot at qualifying for Kona.

I have learned a shit load from you by reading your blog and I am going to give that perpetum stuff a try too. The more I read about it, the more I think it has everything necessary in it.

You did a great job at IMWI Mike.

We plan on doing the 10K on Thanksgiving day too, so see you there. I am betting that it takes me twice as long as you to finish.

I'm down with 2010 too. Someone has to make all you Kona qualifiers look good by going REAL slow.....

A house in chaos said...

Time will tell, I will have to try a few more sprints.

Phoenix would be a great race to help you with your winter running. I have a great program. Maybe you can even BQ!