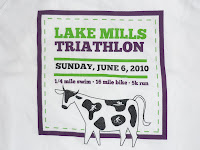 Sunday was the Lake Mills sprint triathlon.  I raced it two years ago and had a blast so I was anxious to get back and race it again.  Last year I did the Rockman Half Ironman so I missed Lake Mills.  This year with the Rockman off the calendar, that opened up this weekend for Lake Mills and I think it worked out great.  I'm tapering for MN and this gave me a chance to race a sprint tri, have some fun, and get in some speed work.  Plus, with being in a taper, I was pretty well rested for the race so I don't have any regrets about going into the race tired or anything like that.

And I got to meet a few members of my new team, which I have been meaning to blog about but haven't gotten around to yet.  I joined GearGrinders this year, and so far I'm really enjoying being a part of the team (more in a future post).

http://www.gear-grinder.com/  Check them out.  Their coffee is fantastic.

The swim:  I was signed up for the elite wave, which was the first wave.  The swim went pretty well.  My swim time was good for me, but not great.  I'm making progress so I'm really happy about that, but it seems that I continue to find myself in the middle.  I lost most of the lead group early on and had completely lost that group by the halfway point and I more or less pulled the second group for the last half of the swim.  I'm not a very strong swimmer so I get frustrated when I find myself pulling a group.  I need the draft, but it's going to take a little more speed so I don't lose the draft when I have it, which I constantly do.


Oh well.  It was still a good swim so I'm happy with it.  Here are videos of the start and finish of the swim.  In the finish, you can see me come out of the water right after the lead group.  I'm in the green cap on the right side of the screen.


The bike was really good.  I've had a few bad bike rides lately so I wasn't sure what to expect, but my legs felt strong.  I passed a lot of people very early into the bike, and was pretty surprised I was able to make up ground so quickly.  I could see the lead vehicle for the first quarter of the bike and eventually worked my way into 3rd.  The lead vehicle eventually disappeared, and I was alone for several miles.  Unfortunately, I got passed by two cyclists on the second half of the bike so I dropped back to 5th.  The first cyclist to pass me pulled alongside me, looked up the road and saw no one, looked at me, looked up the road, and then back at me and asked, 'are you in the lead?'  'Sorry, but I can't even see the leaders.'  I think he was pretty disappointed.


Anyway, I came off the bike in 5th so I was really happy with where I was because I was hoping to crack the top 10 for the day.  Lake Mills draws some tough competition so I wasn't sure I could do it, but I felt pretty good about my odds now that I was starting the run in 5th place.

Here's some video of T2.  Three things stand out to me watching this video.  #1 - I need to learn to put shoes on quicker.  #2 - I need to learn to stop ignoring my name because sometimes when a person yells "Go Mike" it's actually for me.  It registered too late that that was Courtney.  I kind of look like a dick in this video running past my girlfriend without a wave or smile or anything.  I need to pay attention.  #3 - Someone needs to tell that dude in black that this is a timed event.

The run was good, but I would've liked to have run a little faster.  I make up time on the bike and inevitably lose a little of it on the run.  I dropped 3 spots, which isn't bad, but unfortunately the guy that finished 10 seconds ahead of me was 1st in my age group.

I finished 8th overall and 2nd in my age group so I'm really happy with how the race went.  I really want to get faster and be more competitive, but I can't look back at any part of the race and say that I screwed up so I know that I gave it everything I had and that was all I had yesterday.  That's a good feeling.  Even though I want to run closer to the front, it's that desire to get better that keeps me training and keeps the sport fun so it's a good thing (despite my lack of patience).


I'm planning on talking more about GearGrinders in another post, but I should mention that GearGrinders are fast.  Holy smokes.  John, the manager, sends out a weekly newsletter and includes results and I can't get over how many GearGrinders take home overall and age group awards every week.  And Lake Mills was no exception.  Check it out....

Two first place age group awards and Adrienne and Elizabeth were the 3rd and 4th place females overall.  The results GearGrinders post are impressive, and it definitely motivates me to keep training hard, and that's part of the reason I joined the team.  I hope I can keep improving and put together some good races and contribute to the team's success.  That's the goal.

I'm really disappointed you don't have a video of me falling off my bike coming out of T2. :-)

Nice race. I'll be practicing the mount/dismount today as well as transitions.

Good luck with your season.

Nice race report and nice finish! Good luck to ya later this season for your bid to Kona Qualify.