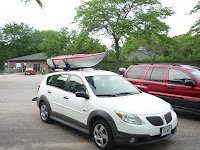 Friday, I got out for a short, easy lunch ride.  I kept it in the small chain ring and spun and enjoyed the weather.  After work, I swam 3 miles in Lake Wingra with a few hard efforts thrown in.

Saturday morning, Courtney and I got up early and headed up to Devil's Lake for more swimming. Another 3 miles.  This time I just did some distance, no hard efforts.  There was a threat of storms, but they never happened and it turned out to be a perfect morning for a swim.  The weather was great, winds were calm, and the water was perfect.

Sunday, the weather wasn't so cooperative.  I had a big workout planned but postponed it to let the storms pass.  I'll ride in the rain, but thunderstorms are another story.  My original plan was to swim in the lake and then ride and run right after, but I opted to wait out the weather and do my swim at the Y.  Taking the kayak out of the picture made things much easier logistically.

Late morning, it looked like the storms had passed so I headed out.  I swam super easy because it was going to be a long day, but mainly because my chest and shoulders were really sore from the 6 miles I swam the previous two days.  I'm not used to that kind of swim volume.  Then I headed home and got on my bike for 100 miles.  I rode somewhat easy for 2 reasons: 1 - I haven't ridden a century in about 2 months so I'm not really trained for that kind of distance 2- it was super hot and I wanted to make it through the whole workout.  In the end, I probably went a little too easy, but it was good base miles.  I averaged about 190 watts, and IM goal wattage is 215-220 so I was well below my goal.  But I got off the bike feeling pretty good so it was probably the right call.  My legs were tired, but not shot.

After the bike, I ran 13 miles.  I really wanted a good run, which was part of my thinking in going easy on the bike.  I've been playing around with the run/walk method and liking it so far.  I was hoping to go at IM goal pace, but I came up short.  I struggled with the hills in MN so I mapped out a very hilly route that included a couple of sections of the cyclocross course in Verona.  It was a tough route.  Add in the heat and fatigue, and my average pace was 8:35.

So all things considered, it was a very good weekend of training.  Lots of volume and base building.


Courtney in her new kayak.  It was a great day on the lake.  Lots of sailboats, kayaks, canoes and even teams practicing for the dragon boat race.  We forgot to take a picture of them. 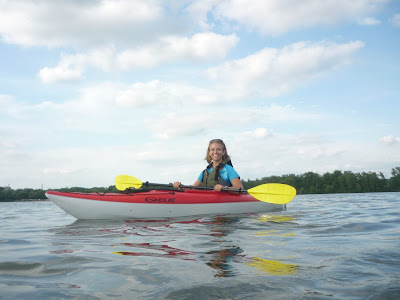 I can't believe these pics of her turned out so well.  Taking pictures while treading water isn't easy. 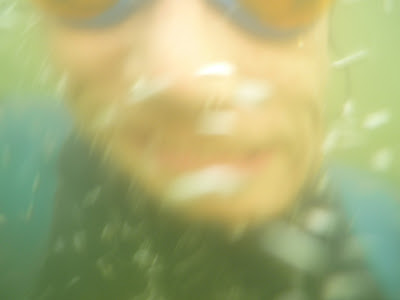 My poor attempt at underwater photography. 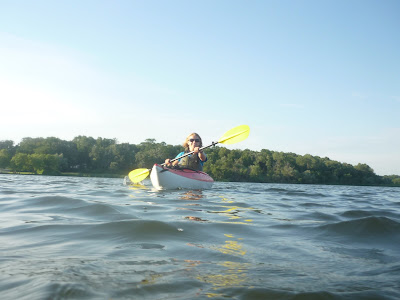 Some video Courtney took toward the beginning of my swim. 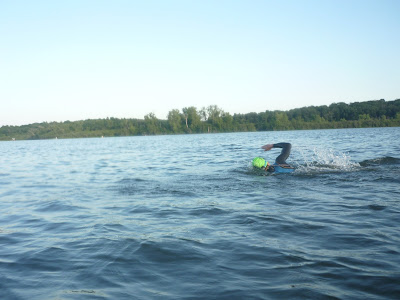 Swimming back toward the beach. 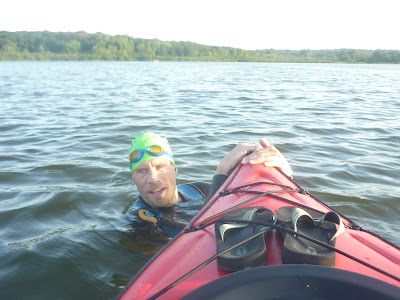 Taking a break.  That's the great thing about having a kayak.  Taking breaks mean I don't have to tread water and I can get a drink.  It would be really tough to do 3 miles without a chance to get some water. Lake Wingra is really warm so getting dehydrated and cramping up is a concern. 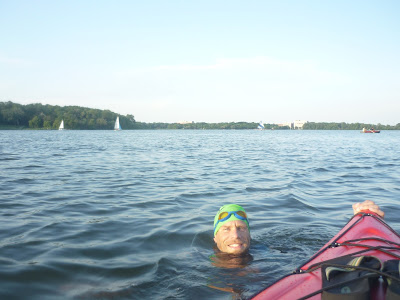 Still taking my break.  I needed a picture with the sailboats in the background.  I'm thinking cropping everything out and using this as my Facebook profile pic.  I'll be a floating head.
Posted by Mike at 6:43 AM

what a great place to swim. must be nice not to have to worry about any rogue critters.