Week one is done 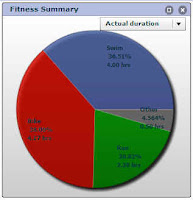 Week one of training is in the books, or to be more precise, in Trainingpeaks.com. The week went well, but it wasn't quite the easy first week I'd planned on.

My first run after nearly a month off was a little rough. I ran at night in the snow and didn't see a hole and rolled my ankle. Surprisingly, my ankle felt fine, but I think I tweaked a muscle in my quad because it has been hurting since. Running aggravates it so I'm taking today and tomorrow off running to see if that helps the pain go away.

Other than that, the week went well. I got 8900 yards of swimming, which is a great first week. Training for Florida I only had 7 weeks with higher volume than that, and topped out at less than 15,000 yards on my biggest week. So I'm ahead of last year with my swimming.

Running and cycling will come around. My fitness is low right now so I'm working on getting it back, which shouldn't take long, and then I'll focus on building strength and endurance.

If you notice, the chart has 30 minutes of 'other.' What's 'other?' Yoga. I'm adding yoga to my routine this time around to increase flexibility and strength. I'm not flexible so yoga is pretty tough for me, but I'm not going to give up on it this time around. I'm determined to keep at it until I improve enough that it's more enjoyable.

I'm also going to begin strength training this week, which will include some weightlifting but mainly core work. A strong core helps prevent injuries so that's going to be crucial if I'm going to survive another year of ironman training without an injury.

Swam with my H2O Audio again Sunday, and I love that thing. I got it set up in the locker room before getting in the pool and that worked out much better. From that point on, I didn't notice it. The ear phones stayed put and the music sounded good. A great b-day gift. Thanks mom and dad.

If this had been one of my male friends, I may find it funny. But a female friend? It's a little disturbing. I figure later tonight she'll become a fan of dutch ovens. I mean, why not? If you're a fan of farts, you surely must be a fan of being trapped under the covers with one. *sigh*

The Olympics are coming! 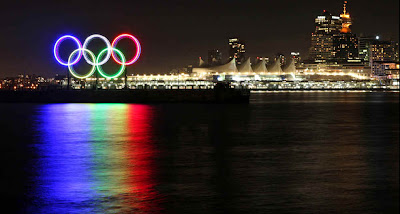 Some great pics of the torch: