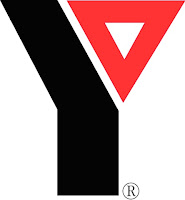 They changed the hours at the high school this year so I can't swim in the mornings, and I don't like swimming there in the evenings because the pool is full of kids taking lessons. They only have 2 lanes set aside for lap swimming and I always have to share a lane, sometimes with 2 or 3 people. I don't really mind sharing a lane, but it gets tough when you have 6 people in 2 lanes and you're trying to do intervals. It gets old.

So I figured I'd give the YMCA a shot. It's really close to work (and home) and you can do a month by month membership so I can cancel it during the summer if I want. Plus it's about $20 per month cheaper than most health clubs...and for good reason I'm quickly finding out.

The pool isn't bad, and I like the hours so no complaints there. But the locker room is nasty and really small. And the place is kind of crazy with all the kids running around. I miss the Riverfront Athletic Club. That place was awesome.

But anyway, I'm back in the pool now. I've been slacking big time this winter, so now that I have a membership to the Y I have no excuses. I've been there 3 times now, 3 days in a row, and each time I had a lane to myself for at least half of my workout. I barely knew what to do it's been so long since I've had a lane to myself. So I've now gotten in 3 good swim workouts.

I've been using Training Peaks online this year to schedule my workouts, and I just discovered that there are tons of workouts available to me, and all I have to do is drag them onto the calendar. The only problem is that there are hundreds of them so you could spend a lot of time digging through them, but the search feature is really good so it's not that tough to find some good workouts quickly. This is going to save me a lot of time, and I tried one of the swim workouts today and I really liked it. This should help me mix up my workouts because I end up doing the same workout all the time because I don't feel like coming up with new workouts. 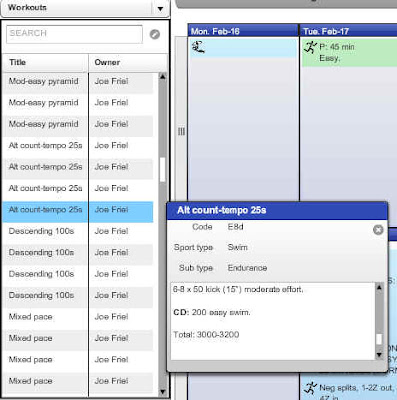 Yesterday was the third indoor TT. I had a great warm up and felt really good so I was confident I could beat my previous time. I did....kind of. Here's where I get frustrated with computrainers, and I'm not all that impressed with them for what they cost. Once again, the calibration seemed a little off, because I increased my watts by 24 (according to my Powertap) and only improved my time by 1 second.

I was running in second place the whole time, only about 200 yards behind the leader so I was working hard to catch him. In the end, I came up 6 seconds short but I think it worked out perfect because I got a killer workout in. I don't know if the calibration was off or not, but I do know it wasn't the same as it was last time. For what computrainers cost, I would expect them to be more consistent (not to mention the watts never agree with my Powertap). But in the end it was perfect because being only 200 feet behind the whole time had me pushing myself much harder than if I had been way out in front or way behind. So the end result is that I had my best indoor TT so I'm happy with that. But I'm a little disappointed I didn't win again because I could've used the money since my computrainer account is down to $0. So it goes. 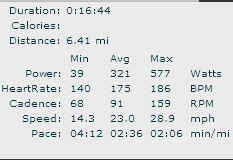