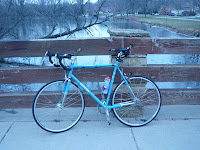 Now that the weather has turned cold, I've switched to my fixie. There's something about riding a fixie in the off-season that just makes sense to me. But I have to admit, that thing is killing me.

Sunday I combined the Old Man Loop and the Gun Show Loop and got in a good, hard 30 miles on my fixie. It was a fast ride so I was pretty tired at the end.


We were planning a fixie lunch ride Monday, but Monday morning looked like this and with a high of 35 the snow wasn't going to melt by noon. 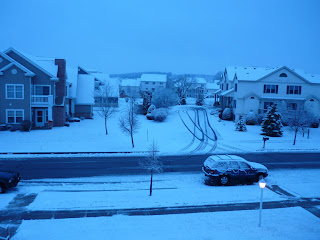 So I went to SBR for the Monday Night Football trainer ride. We rode until halftime. I started out a little tired from Sunday's ride, but I felt surprisingly good once I warmed up a bit. Then the punishment started. Every time the announers mentioned Brett Farve, we had to do a one minute standing climb. Every time the Packers scored a TD, a one minute sprint. At the end of the first half they started talking about Farve so we ended up doing a 7-minute climb. As we were finishing up minute 7, the Packers scored a touchdown. As we were finishing up that sprint, they started talking about Farve again. It was brutal, and my legs were pretty sore Tuesday morning.

So we did our fixie ride at lunch Tuesday. There were three of us, all riding our fixies (the same bike so I'm sure we looked pretty gay) and we pushed pretty hard so my legs went from bad to worse.

Wednesday....same thing. Lunch time fixie ride, except we didn't push quite as hard. The cumulative effects of the fixie got the best of me when I got home from work and I crashed on the couch for a while. I think that was one of the best naps I've ever had.

Today is Turkey Day, and since I'm not racing the Berbee Derby, I'm planning on doing the Old Man Gun Show loop again before dinner. Another hard 30 miles on the Madison. That should put a hurtin on me. If the weather holds up, I'm doing that ride again tomorrow....after the waffle run and some black Friday bargain hunting.

I have had a week off riding my bike to work this week and it has been really unpleasant (public transport sucks (it's full of chubsters who 'overflow' onto your seat). I've got a knee problem and I wanted to see if not riding made any difference and sadly I think it has slight. I'm back on it next week, so we will see how it feels. fingers crossed...

It looks mighty cold in your second picture, I'm really looking forward to some proper mid-western winter when we are there in about 4 weeks (can't wait - 13 work days to go).

Yeah, it's fixed. I have a back brake on it, but I never use it because I plan on taking it off and just running the front. I just haven't gotten around to it yet.