After Friday's training ride, I was hoping Sunday's long run would go well to make up for the flat tire. I mapped out a route that started out really hilly, then flattened out and followed the Military Ridge Trail. I set a time/pace goal so I could use the virtual partner function on my Garmin.

If you're not familiar with Garmins, you can map a route and choose a goal pace and race against a virtual partner (you can also load a previous run of yours and race against yourself). The watch tells you how far ahead or behind you are. It's pretty cool.

I left the house at 7:45 am, hoping to beat the heat. I started out a little conservative, knowing the hills could kill my run if I don't hold back a bit. I was losing a little distance to my virtual racer, but not much. Knowing the route flattened out at the halfway point, I figured I could make up any distance lost in the hills.

About the 4 mile mark a huge dog lunged at me from behind some trees in his yard. He stopped a few feet from me with the hair on his back standing up. I came to a halt instantly. He stared at me and I walked a few steps forward. He didn't do anything so I kept walking slowly and moved from the left side of the street to the right. He watched, but didn't come any closer. I kept walking on the opposite side of the street until he was out of sight. I lost a lot of distance to my virtual racer, and hit my max heartrate for the day.

I was .4 miles behind, so I stepped up the pace and hit the remaining hills a little harder. Soon I made it to the Military Ridge Trail where I continued to reel in my virtual racer. I finally caught up, and then pulled a .1 lead when I came upon a flooded tunnel that ran under 151. There was a path through the grass where runners have been climbing up and crossing the road. I followed the path, crossed 151 and then couldn't find the trail on the other side. I thought it ran straight under 151, but it ran diagonally so it came out further down the road than I expected. By the time I got back on the trail, I was .1 behind again.

I stepped it up again and once again reeled in my virtual racer. It was kind of fun watching the distance, and it definitely helped pass the time and keep me motivated. Then I pulled a big gap. .1 miles, .2 miles. .3...all the way to .35 when my watch switched from .35 miles ahead to .35 miles behind. I don't know how that happened, but I decided to go with it and try to close the gap. I only had a few miles left, but it was a good challenge.

I picked up the pace and watched the gap continue to get smaller until I finally closed the gap with less than a half mile to go. So I finished with my fastest miles and beat my virtual racer. That definitely made up for my flat tire Friday.

Then I ran to the gas station to buy 20lbs of ice for a much needed ice bath. 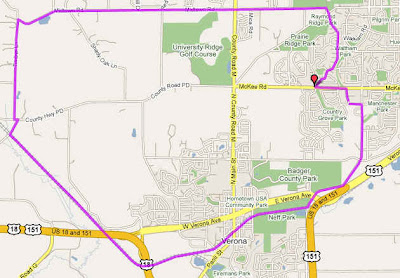 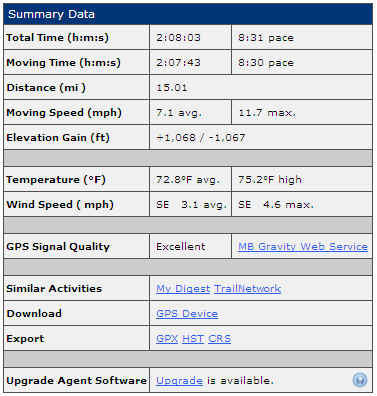 Next Sunday I'm running 17 miles, except I don't think I'll spend as much time on the Military Ridge Trail. I haven't planned my route yet, but it's definitely going to be hilly. Maybe some more Midtown torture.

Ironman Wisconsin is only 41 days away.

Love the garmin virtual trainer. I don't use it much but it is nice when you want to challenge yourself.

I wonder if that dog has a invisible fence and collar? I get a little freaked out over big dogs and when the hair stands up you know they mean business.

40 days. I'm hoping for good weather for all the participants and us volunteers too.