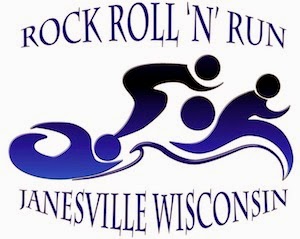 I wasn't planning on doing the Janesville tri this year, mostly because I don't like the beginning and end of the bike course.  The roads are horrible, and the intersections in town don't feel patrolled very well and they make me nervous.  I've had a few cars pull out in front of me at this race. There's a lead vehicle, but there's only so much they can do so when I come to an intersection and see a car pulling up to a 4-way stop I start chanting to myself "don't go, don't go, don't go...."  I've been the lead cyclist at other events and the police do a much, much better job controlling traffic and I feel much safer. Once I get out of town, I really like the course and don't worry about traffic.

That said, I decided to do Janesville because my dad said he could go.  Chemo beat his white blood cell down, and so at the last minute he wasn't able to go. I considered sleeping in and watching the Tour, but opted to race instead.

The swim is a TT start and being last year's winner I got to start first. I've had a bit of a swim breakthrough recently so was feeling pretty confident that I could have a good swim.  I wasn't sure who all my competitors were, but I knew 2nd and 3rd from last year weren't there.  I did see Daniel Pearson, who beat me at the Cudahy duathlon last year by out running me by minutes (he can run).  He opted not to wear a wetsuit, which I felt was a mistake.  He gave me some free time on the swim.

I swam well and since I got to start first I was the first swimmer out of the water.  That's a first for me.


Being from Janesville, I knew the driver of the lead vehicle and she let Courtney ride along so she got some pics of me on the bike.  The bike was pretty uneventful.  I was first on the bike, and set the fastest bike split so I managed to extend my lead.

Wanna see what I mean about the intersections?  Watch these videos.  Where is the cop when I go through the first intersection in the first video?  It's a 4-way stop.  If a car is there and they don't know there's a race, even if they see me, they won't necessarily assume I'm not stopping. If they go, I lose.

In the second video you can see a volunteer, but not in the middle of the road so I can't see them so I don't know if the intersection is controlled or not.  And you can see the police arriving...late.  Well done, Janesville police.  Well done.


Once I got onto the run, I checked my watch and started looking for Daniel.  I figured I needed at least 2 minutes on him.


I saw the second cyclist coming in and estimated I had around 2 minutes on him.  Next was Daniel, and I estimated around 3.5 minutes.  That should be enough, but you can't take it for granted.  I tried pushing the pace, but really struggled in the first half of the run.  I actually rode easier than I'm capable of so I should have felt better on the run, but I just couldn't get moving. The first half of the run has a pretty good climb, and I only managed a 6:34 pace.  Not good enough.  Like most races, I felt much better after the first mile and a half (maybe I'm getting old, but it seems to take me a mile and a half to get my running legs under me).  After that, I managed a 6:03 pace for the second half of the run.  It's got plenty of downhill, but I'll take it.

In the end, it was enough to hold off Daniel by about 90 seconds.  Being the first one in the water, I led this race wire to wire.  That's a first for me.  Honestly, it's a little more fun passing people, but I won't complain.  :)

So I wasn't going to do the race, but I did and had a lot of fun so I'm glad I didn't skip it.  I defended my title, saw some friends, and I think Courtney had a good time riding in the lead vehicle which is a first for her.

Long race report for a race I was going to skip.

Next up is the Muncie 70.3 on July 12.  I checked out the participant list and notice the guy who took 2nd in my age group in KS is doing Muncie.  I was 3rd in KS, so this is the guy I was chasing.  He out swam me by a lot.  I out biked him by a minute or two and our run splits were almost exactly the same.  I'm feeling better about my swim and I plan on pushing the bike a bit harder.  I'm sure there are others I don't know who will get in the mix, so it should be an interesting race. I'm looking forward to it.
Posted by Mike at 10:23 AM

Thanks for sharing this is really interesting. Somehow I reached here while browsing. But when I gone through your Blog.. Its just awwwesomme. I have subscribed your siteupdates via E-mail. Keep on updating buddiiee. And I have also bookmarked it for future visit and I am definitely going to come here soon for more discussions.
please don't forget to visit my blog http://tamboenman.blogspot.com