Last July I tried to get in 1,000 miles on the bike in one month, and came up short because I got a couple of flat tires that cut a ride or two short and I missed my goal.  This year I decided to try to get in 1,000 miles in May (it’s National Bike Month so it made sense to do a lot of cycling).  Prior to May, I hadn’t had a single flat tire this year.

I got a rear flat on a long ride toward the beginning of the month.  I couldn’t find what caused the flat but didn’t think much of it because you’re bound to get a flat from time to time when your ride a lot. No big deal.  But on my next ride (a tempo ride too, so it was a key ride) on those same wheels (training wheels) I got two flats and had to call Courtney for a ride.  Again, I never found the cause so I decided to spend some time inspecting my rims when I got home to see if the rim was causing the flats.  It was.

On the opposite side of the valve stem, there was a small sharp piece of excess welding that was puncturing my tubes.  It must have been covered up by the rim tape, and I think the rim tape slid over a bit exposing it and that’s why I suddenly started getting flats.  So I filed it down and replaced the rim tape.  Fixed.

Then I got a flat on my race wheels.  This time it was the rim tape again.  It bunched up and exposed one of the spoke holes and that popped the tube.  So I replaced the rim tape on those wheels too.  Then on my next tempo ride, I caught a sharp rock and sliced my tire wide open.  I couldn’t repair it and had to call Courtney again for a ride.  This time I was 20 miles from home.

Later in the month, on a ride on my road bike (3rd set of wheels) I was coming off a gradual downhill so I was going pretty fast.  There was a cyclist up the road who was soft pedaling and moving very slowly.  He looked like he was waiting for someone.  He saw me coming and moved over to the middle of the road.  Weird, but I figured he was giving me the side of the road since that’s where I was riding as I was coming toward him.  Then at the last second he moves over right in front of me.  I got on the brakes hard to avoid him, we almost collided and I ended up flat spotting my rear tire.  The tires were pretty worn already, but now I had some threads showing.  I continued with my ride figuring it was only a matter of time before I got a flat. I got one two miles from home.  #6 for the month.

I do several key workouts throughout the year to make sure I’m on track with my goals.  Key workout #2 on the bike was the 28th.  It was a 4-hour tempo ride.  45 minutes in, I picked up a  staple and got a front flat.  #7 (the rest of the ride went really well).

I could ride 150 miles Monday and also get in my longest ride ever.

I chose to do 150 miles on Monday.  I left the house at 5:30 am and got a flat about 8 am.  It was a front flat, and I couldn’t find what caused it despite a good 10 minutes of inspecting the rim, tire and tube.  So I finally changed it and hoped for the best, but I was really paranoid the rest of the ride and kept checking my tires.  Luckily, I made it home without any more flats, and I got my 1,000 miles in for the month.  1,009 to be exact.

Eight flat tires in one month.  I didn’t even get that many all of last year.


1 flat caused by a rock


1 flat caused by a staple

1 flat on my road wheels


2 flats on my race wheels


5 flats on my training wheels

I think I might shoot for a swimming PR.  The most I’ve done to date in one month is 50,800 yards last July.  I also set a PR for the half ironman distance that month (32:30 at Door County).

I think I’m going to set a goal of 60,000 yards in June with one 20,000 yard week.  That will give me my most yards ever in one week and my most yards ever in one month.  That should give me something to focus on to help take my mind of this knee injury.
*********
I stumbled upon a picture I took at my last time trial to illustrate how windy it was and I forgot to post it. 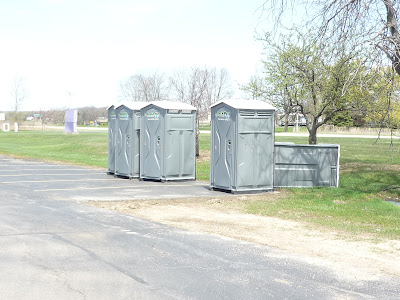 Wowsers! That's a lot of miles in one month. Way to go! I hate flats and seem to be on a streak myself...

Miles of the Journey said...

Understand about the flats. They seem to come in bunches for me too. I have used "gators" and never had a flat, but they are heavy..I think they are bullet proof too, if that is a salient feature. : )

I had several friends recommend gatorskins so I might give those a try. After all the flats I've gotten, my #1 requirement in a training tire is resistance to flats. I no longer care if they're heavy or ride like crap. That will just make my race wheels feel that much better, I guess.

one of the person said that next big journey in his life, won't be on a bicycle, but instead he will concentrate on starting a family and raising awareness for his cause a little closer to home. Tires Miami

Plus sizing your wheels and tires is the most excellent way to improve both the performance and appearance of your vehicle.Wheels And Tires

its nice to read a useful article for beginner like me. Some of points from this article are very helpful for me as I haven’t considered them yet. I would like to say thank you for sharing this cool article. Bookmarked and sharing for friends.